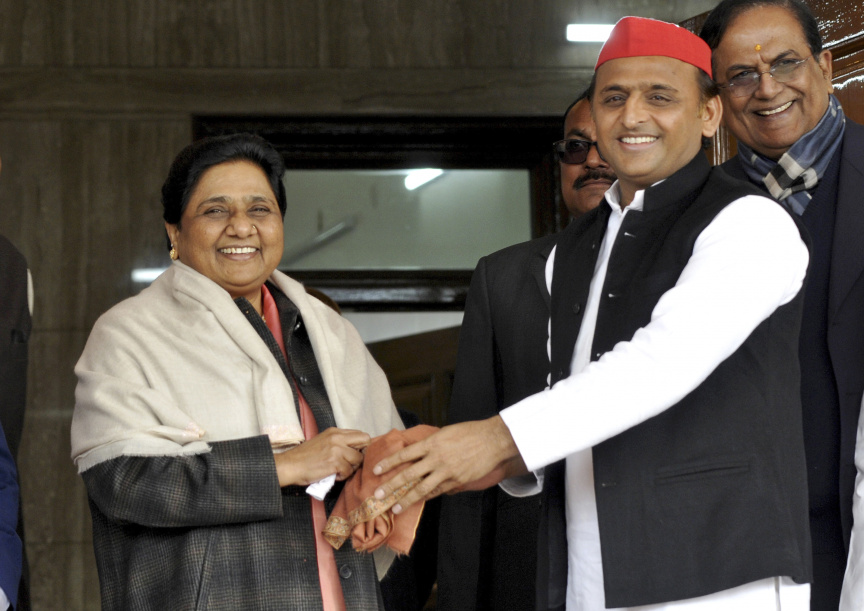 The low caste-dominated Bahujan Samaj Party and the Samajwadi Party, which holds sway among a section of so-called "backward" castes and Muslims, have decided to contest elections in vote-rich Uttar Pradesh state in a rainbow coalition headed by BSP President Mayawati.

"This election will expose BJP because the prime minister has failed to fulfill the promises" he made to lower castes, the poor and the unemployed during the last election, Mayawati, who uses only one name, said during an election rally in Saharanpur city on Sunday.

"His report card is very poor. He helped the rich to earn more riches during his five years of rule and when he realized that he has failed to deliver he used the Pulwama incident to get votes," she said, referring to a Feb. 14 suicide bomb attack against an Indian paramilitary convoy in disputed Kashmir that killed 40 soldiers and brought rivals India and Pakistan to the brink of war.

The rally was filled with party workers carrying flags and shouting slogans. They were also carrying pictures of Mayawati and Akhilesh Yadav, the head of the Samajwadi Party.

Mayawati promised reserved quotas of government jobs for the poor and so-called backward and lower castes, while urging Muslims to vote for alliance candidates "because we are true saviors of the minority community."

"Believe me, BJP is on its way out and the alliance will be part of the next government," Mayawati said.

The alliance could pose a real challenge to the BJP in the five weeks of polling that begin this week, experts say.

"Even though caste discrimination has been officially banned in India, caste continues to be the driving force as it shapes the way people vote during elections," said Giri Institute of Development Studies researcher Nomita P. Kumar.

In Uttar Pradesh, lower-caste people comprise 22% of the population, "backward" people are 45%, and 19% are Muslims. The remaining 14% are upper caste.

"Arithmetically, the alliance between Mayawati and Akhilesh seems very potent. They have numbers under their belt and if voters vote as per these parties, the alliance will sweep Uttar Pradesh," Kumar said.

Out of 80 seats up for grabs in the Lok Sabha, the lower house of India's Parliament, Mayawati's BSP will contest 38 while SP will contest 37 seats. Another regional party, the Rashtriya Lok Dal, will contest three seats. The alliance has decided not to field candidates against leaders of the main opposition Congress party, whose president, Rahul Gandhi, is running from the city of Amethi. His mother, Sonia Gandhi, the widow of assassinated Indian Prime Minister Rajiv Gandhi, is standing from Rae Bareli.

Like elsewhere in India, Modi and the BJP swept parliamentary elections in Uttar Pradesh in 2014, winning about 43% of the votes and 71 out of 80 seats.

"This is Modi magic which has forced two bitter enemies to join hands. This alliance is unnatural. It will not stand the trial of election. Politics is not arithmetic all the time. It requires chemistry too," he told The Associated Press in Lucknow.

The coming together of rivals isn't without precedent.

The BSP and SP stitched an alliance for provincial elections in 1993, when the BJP was gaining ground after right-wing Hindu rioters demolished a mosque in the city of Ayodhya, fanning the flames of Hindu nationalism. That time, the architects of the alliance were Mulayam Singh Yadav, Akhilesh Yadav's father, and Kanshi Ram, Mayawati's political mentor.

Together, the parties triumphed.

The alliance, though, did not last long, abruptly ending in 1995 when Mayawati said "goons" from the Samajwadi Party attempted to kill her in an attack at a guesthouse.

Mayawati's alleged assault turned the two parties into bitter enemies, a chasm that reached down into Uttar Pradesh villages where SP and BSP workers frequently clashed.

However, more than two decades later, the parties have decided to bury the hatchet.

"People are upset with the anti-people policies of the Modi government. We have come together to stop Modi's forward march," Mayawati said at a joint news conference in March with Yadav.

Yadav said that Uttar Pradesh's Muslim voters would "catapult" the alliance to power. Anti-Muslim sentiment in India, which is 80% Hindu, has become more violent since the BJP came to power in 2014. Three dozen Muslims have been lynched by mobs on suspicion of illegally transferring cows, sacred to Hindus, or beef, according to Human Rights Watch.

Mayawati, a former state chief minister, nurtures a dream to become India's first prime minister of lower-caste Dalit heritage. But her ambition could be a liability for the Uttar Pradesh alliance in these elections, said S.P. Pandey of the Pandit Govind Ballabh Pant Institute of Studies in Rural Development.

"The caste alliances are very fragile as these are linked with egos. Mayawati is a known alliance breaker," he said.

"She had entered into alliance with BJP three times and had even asked for votes for Narendra Modi in a provincial election and once fought election as an ally with Congress," Pandey said. "She has used alliances for her ascent because of the jigsaw puzzle nature of Indian politics."