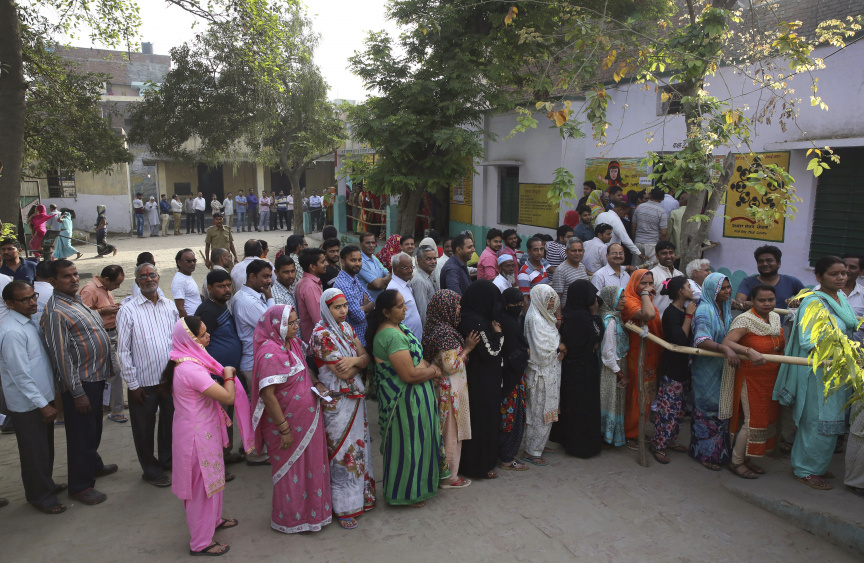 Indians stand in queues to cast their votes at a polling booth for the first phase of general elections, near Ghaziabad Thursday, April 11, 2019. (AP Photo/Manish Swarup)

Voters in 18 Indian states and two Union Territories began casting ballots on Thursday, the first day of a seven-phase election staggered over six weeks in the country of 1.3 billion people.

The election, the world's largest democratic exercise, is seen as a referendum on Prime Minister Narendra Modi and his Bharatiya Janata Party. Modi supporters say the tea-seller's son from Gujarat state has improved the nation's standing. But critics say his party's Hindu nationalism has aggravated religious tensions in India.

Some 900 million people are eligible to cast ballots at around a million polling stations across the country. They will decide 543 seats in India's lower house of Parliament.

Voting concludes on May 19 and counting is scheduled for May 23.

Modi came to power in 2014 and the party invoked its Hindu nationalist roots before the elections, with Modi at the forefront against the threat of Pakistan, India's Muslim-majority archrival. Hindus comprise about 80% of India's 1.3 billion people.

Even though India continues to be one of the fastest-growing economies in the world, the Modi-led government's performance on the economy has come under criticism.

The first item in the opposition Congress party's election manifesto describes a plan for creating jobs. It also promises an income subsidy program for the poorest families and for farmers.

New Delhi votes with Modi’s popularity on the line

Taliban declare spring offensive amid talks with US