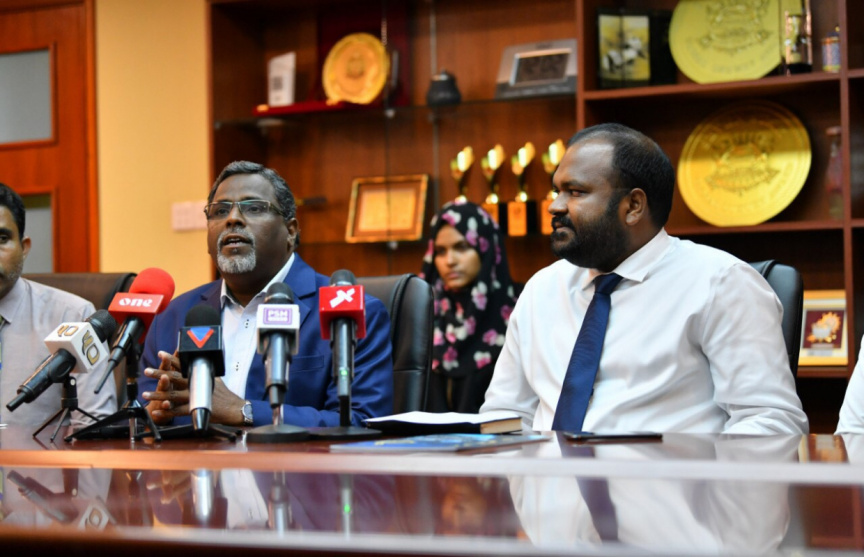 Moosa Nizar from Comfort Travel and Tours (L) and Minister of Tourism, Ali Waheed during a press conference to announce the country's first Arab-language magazine to promote Maldivian tourism on April 1, 2019. (Photo/Sun/Fayaz Moosa)

Travel agency, Comfort Travel and Tours has produced the country’s first Arabic language magazine to promote and market Maldives as a tourist destination.

The magazine produced by CTT was inaugurated during a press conference this Monday by Minister of Tourism, Ali Waheed.

Moosa Nizar from CTT reports the company made the decision to produce the magazine to support the Ministry of Tourism in its policy to promote Maldives in emerging markets.

All the content on the magazine are in Arabic language and aimed at the Middle Eastern market.

“The Islamic tourism sector has seen rapid development across the world. The market growth of the sector is estimated at USD 300 billion. Arab-speaking Arab tourists are among the world’s richest. The group which spends the most,” said Moosa Nizar.

He reports CCT received support from a large number of industry stakeholders’ in production and distribution of the magazine.

The magazine will be internationally launched at the Arab Travel Market 2019, which will be held in Dubai later this April.

'Arrangements for post-lockdown arrivals being formed'

Over 187 tourists remain stranded in Maldives