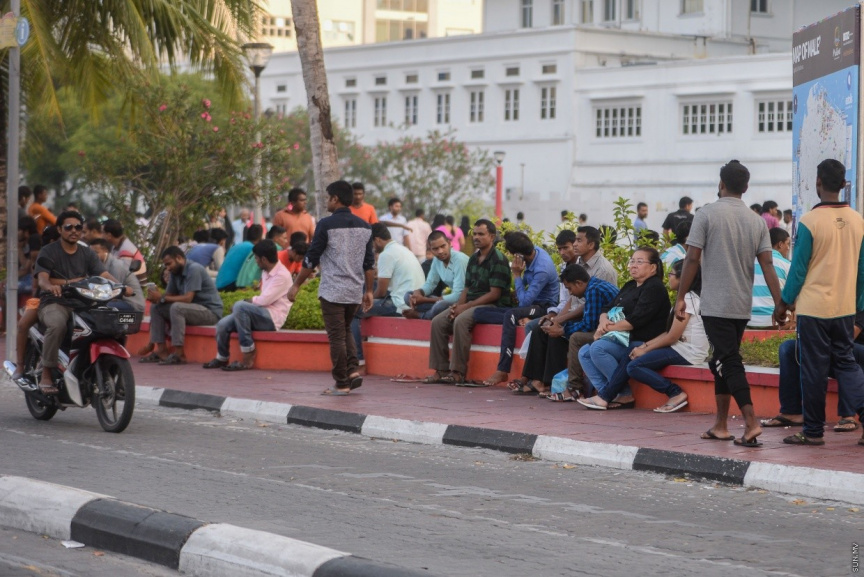 Migrant workers relax at the Republic Square in Male' City, Maldives on their day off from work. (File Photo/Sun/Mohamed Afrah)

Establishment of a minimum wage in Maldives could result in destruction of small enterprises, warns Maldives Trade Union (MTU).

In a statement last Sunday, MTU stressed that Maldives was a command economy - a system where the government, rather than the free market, determines what goods should be produced, how much should be produced and the price at which the goods are offered for sale. It also noted that the Maldivian economy was made up of only a few main sectors.

MTU acknowledged the government’s new policy of developing small and medium enterprises, but warned the establishment of a minimum wage could result in the destruction of the very same industry it seeks to protect.

“While the government has implemented policies to establish to protect and develop small and medium enterprises, alarm has been sounded over several policies by the government which conflict the aforementioned policies. One such policy under debate which could have the most impact on the economy is establishment of a minimum wage,” wrote MTU.

It said minimum wage was a communist and leftist policy which could cause irrevocable damage to the economy.

The union stressed that minimum wage was against the principles of free market economy.

The union also warned a minimum wage would reduce demand for labor and increase supply of labor, which in turn could increase unemployment and increase price inflation.

It warned the negative consequences would have the most impact on the middle-income group, and would result in forced shutdown of small and medium enterprises – resulting in an economic downturn.

MTU said in its statement that the negative impacts of establishing a minimum wage was well documented globally, and warned that the impact on an economy such as Maldives – due to its heavy dependence on foreign financial assistance – could be especially dire.

“Because Maldives imposes customs duty and regressive taxes, and is unable to provide concessions to businesses. The result of this is medium enterprises and the low-income group having to bear the consequences and hardship which comes with every economic problem,” wrote MTU.

MTU wrote the biggest challenge in the Maldivian labor market was not the lack of minimum wage, but the fact that the major players in the tourist sector and investment sector were foreign companies, those under their control and who manage human resources are foreigners, and the decision by those key players to employ foreigners to high-income posts instead of locals by arguing lack of competence of locals.

“Turning a blind eye to this sensitive economic issue and challenge and promoting a minimum wage can be considered a lack of willingness to tackle real and prevalent issues in the Maldivian labor market and creation of a new economic problem designed to further weaken the Maldivian economy,” wrote MTU.

The union appealed to the government not to establish a minimum wage without proper research, warning the destruction of small and medium enterprises would also affect larger enterprises.