Yameen: This administration has done nothing but chase and abuse people 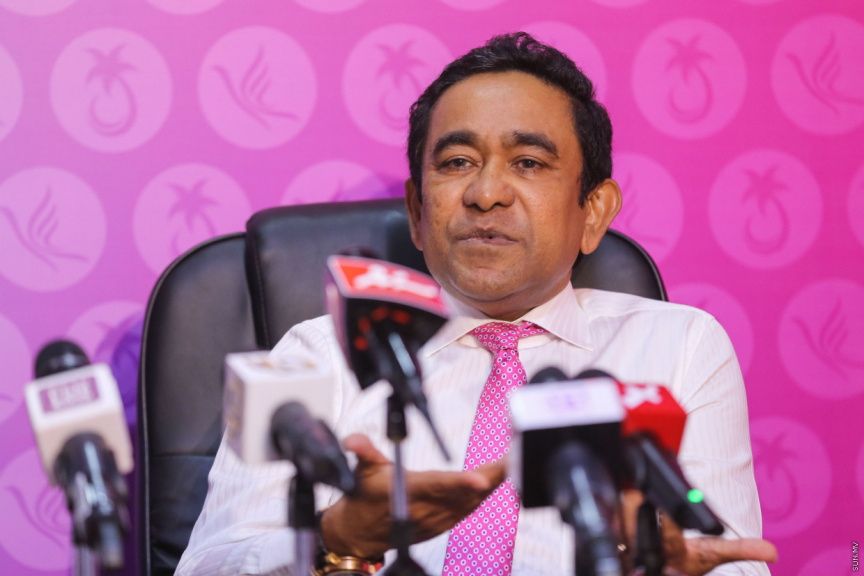 The current Maldivian administration has not initiated any development projects, and has done nothing but chase and abuse its citizens, says former Maldivian President and Leader of PPM, Abdulla Yameen Abdul Gayoom.

During a campaign event held last Friday night for Muaz Ibrahim Rasheed – PPM and PNC’s parliamentary candidate for the Madaveli constituency – Yameen said that despite not being able to travel to Madaveli due to current circumstances, he wished to speak to the people even if via a phone call.

He alleged that the “actions by the current administration” had prevented him from conducting campaign tours and touching campaign money.

“The administration is close to its fifth month but is yet to carry out any such [development] initiatives. What they keep doing consistently instead is travelling from one place to other, delivering speeches, and chasing abusing people. I have yet to see anything else,” said Yameen.

Yameen said that the current administration or anyone else did not need to “abuse people” in order to win at elections.

Yameen said that the current administration was a failure, and that they “establishing this and that commission and carrying out illegal activities” to hide its failure.

“In five months, they have not done anything substantive. I know what I’m saying will direct heat at me again. But this is the reality, isn’t it?” he said.

Yameen said that his arrest and the freeze on his funds - which could have been utilized to campaign for the upcoming parliamentary elections - was a blatant violation of democratic principles.

He said that the lack of consideration of political leaders towards their constituents was the downfall of Maldives.

Yameen, who is now the country’s opposition leader, was charged with money laundering following two USD 500,000 deposits - totaling USD 1 million – made to his personal bank account at the Maldives Islamic Bank (MIB). The deposit was made by SOF Private Limited and is believed to be a fraction of the money embezzled from Maldives Marketing and Public Relations Corporation (MMPRC) during his administration.

The Criminal Court initially granted the State an arrest warrant for Yameen on February 18 following evidence of witness tampering. The arrest warrant was annulled upon appeal by the High Court and he was released on March 28.