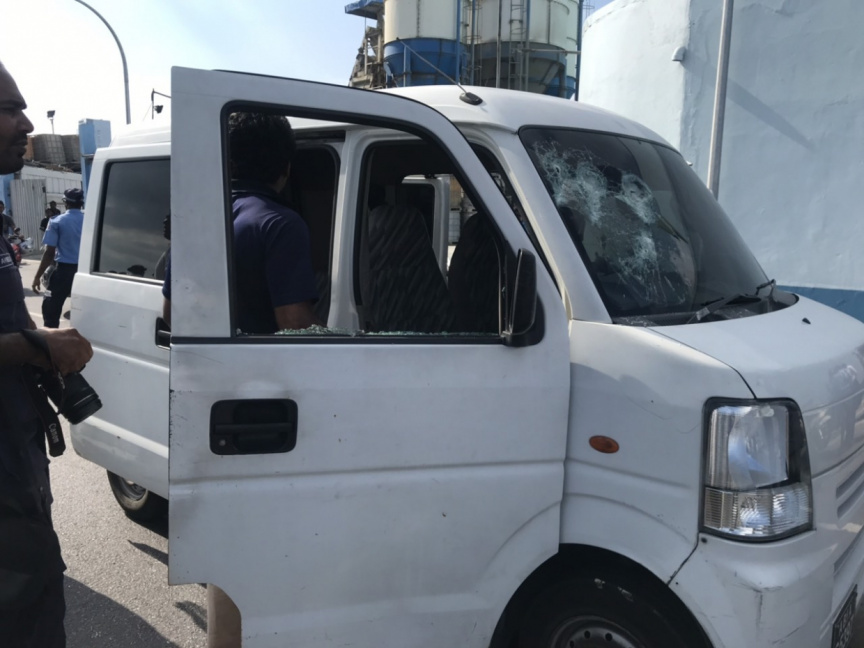 MIFCO's vehicle damaged in the daylight heist on March 20, 2019. MVR 2 million was stolen from the vehicle. (Photo/Sun/Mohamed Muzayyin Nazim)

Maldives Police Service reports it has two suspects in custody in connection with the MVR 2 million stolen during a cash-in-transit by Maldives Industrial Fisheries Company (MIFCO) on March 20.

The first suspect, the 19-year-old male was arrested last Saturday and has been remanded to 15 days in custody. And the second suspect was arrested later on Saturday night.

MIFCO was carrying MVR 2 million on one of its delivery vans to the Velana International Airport for transport to Felivaru when four masked robbers carrying machetes intercepted the vehicle on the Male’ City ring road, near the Villa College campus.

The robbers smashed through the side windows of the van, grabbed the money, and fled the scene.

The robbery took place in plain sight at approximately 3:15 pm on March 20.

Maldives Police Service has not yet had any luck in locating and recovering the money stolen in the robbery.

The robbery took place exactly 10 days after one of BHM Traders’ cash-in-transits were targeted by masked robbers outside the State Bank of India headquarters in Male’ City. The MVR 2.3 million stolen in the robbery is also yet to be found.