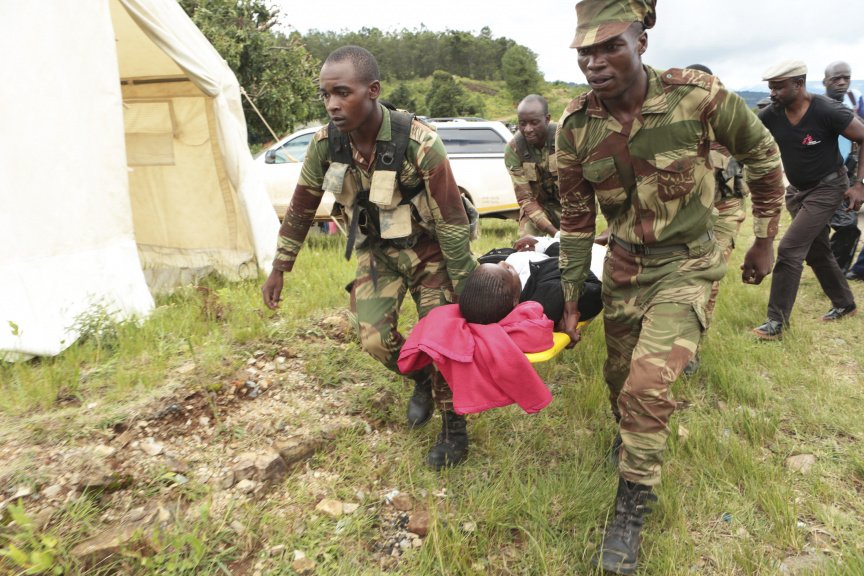 CHIMANIMANI, Zimbabwe (AP) — Aid workers rushed to rescue victims clinging to trees and crammed on rooftops Tuesday after a cyclone unleashed devastating floods in Mozambique, Zimbabwe and Malawi. More than 350 people were confirmed dead, hundreds were missing and thousands more were at risk.

In Mozambique, the rapidly rising floodwaters created "an inland ocean," endangering tens of thousands of families, aid workers said as they scrambled to rescue survivors and airdrop, food, water and blankets to survivors of Cyclone Idai.

"This is the worst humanitarian crisis in Mozambique's recent history," said Jamie LeSueur, head of response efforts for the International Federation of Red Cross and Red Crescent Societies.

Mozambique's President Filipe Nyusi said late Tuesday more than 200 people had been confirmed dead in his country. Earlier he said the death toll could reach 1,000.

"There was a house there, it was buried and the owners may have been buried with it. They are missing," said Zacharia Chinyai of the Zimbabwean border town of Chimanimani, who lost 12 relatives in the disaster.

"We heard news on the radio" about the flooding in neighboring Mozambique, he said. "But we never thought we could also be victims. ... No one told us it was going to be this devastating."

"I wasn't able to save anything except this baby," she said of her lone surviving child, a 6-month-old son, who suffered an eye injury and scars to his face.

The family was sleeping when theit house collapsed, the 30-year-old said.

"Trees, rocks and mud were raining on us. I grabbed my son, my husband took Anita and we ran to a hut, but that also collapsed. Anita died there," she said.

Amanda was trapped in the rubble of their house and her body was not found until the next day.

"I knew she was already dead. I cried the whole night," Dhliwayo said. "I lost so much that I wish I had just died."

"This is a major humanitarian emergency that is getting bigger by the hour," Verhoosel said.

He said people were "crammed on rooftops and elevated patches of land."

"People visible from the air may be the lucky ones and the top priority now is to rescue as many as possible," he said.

Many areas remained impassible. With key roads washed away, aid groups were trying to get badly needed food, medicine and fuel into the hard-hit city of Beira, on Mozambique's coast, by air and by sea.

"It's dire," Caroline Haga of the Red Cross told The Associated Press from Beira, a city of 500,000. "We did an aerial surveillance yesterday and saw people on rooftops and in tree branches. The waters are still rising and we are desperately trying to save as many as possible."

Satellite images were helping the rescue teams target the most critical areas, Haga said. Rescue operations were based at Beira airport, one of the few places in the city with working communications.

The waters flooded a swath of land more than 150 square miles (290 square kilometers) in central Mozambique, according to the European Union's global observation program, which was mapping the crisis, putting more than 100,000 people at risk.

"The full horror, the full impact is only going to emerge over coming days," Red Cross spokesman Matthew Cochrane told reporters in Geneva.

Thousands of homes were destroyed in Beira, and the city and surrounding areas were without power and nearly all communication lines were destroyed. Beira's main hospital was badly damaged, and in large areas flood waters completely covered homes, telephone poles and trees, the Red Cross said.

Beira could face a "serious fuel shortage" in coming days, the WFP said, and its power grid was expected to be non-functional through the end of the month.

In Zimbabwe the death toll was 98 but expected to rise, a local government minister, July Moyo, said.

He said bodies of Zimbabweans had been reported floating all the way into Mozambique. "Some of the peasants in Mozambique were calling some of our people to say, 'We see bodies, we believe those bodies are coming from Zimbabwe,'" Moyo said.

Among those fleeing Chimanimani on foot was Luckmore Rusero, who carried a small bag with his remaining possessions. His wife carried their 1-year-old while their 11-year-old son struggled to keep pace as they joined many others in seeking refuge.

"Thank God we survived. There are no roads, no transport, so we have been walking for more than 20 kilometers now through the forests and the mountains," Rusero said.

Some escaped with nothing but their lives.

"I fled naked," said Tecla Chagwiza, whose home in Chimanimani was destroyed, "I only received clothes in the morning from well-wishers who are also helping me with food."

Zimbabwean President Emmerson Mnangagwa arrived in the flooded area on Tuesday and was expected to fly by helicopter to disaster sites on Wednesday. He said the United Arab Emirates, South Africa, Botswana, Namibia, Tanzania and Angola, were offering aid.

Malawi's government confirmed 56 deaths, three missing and 577 injured in the flooding, which caused rivers to burst their banks, leaving many houses submerged and around 11,000 households displaced in the southern district of Nsanje.

The United Nations allocated $20 million from its emergency response fund to ramp up the humanitarian response in Mozambique, Zimbabwe and Malawi.

U.N. humanitarian chief Mark Lowcock said that "the bulk of the funding will kick start the response in worst-hit Mozambique." But he stressed that $20 million is insufficient for the needs of cyclone victims and urged donors to contribute generously.

The U.N. money will complement government efforts to provide health care, food and protection and help humanitarian groups restore emergency telecommunications and scale up the provision of water and health services, he said.

The European Union and Britain also pledged aid, and the U.S. Embassy in Zimbabwe said the U.S. was "mobilizing to provide support" to partners in the three affected countries, but provided no details.