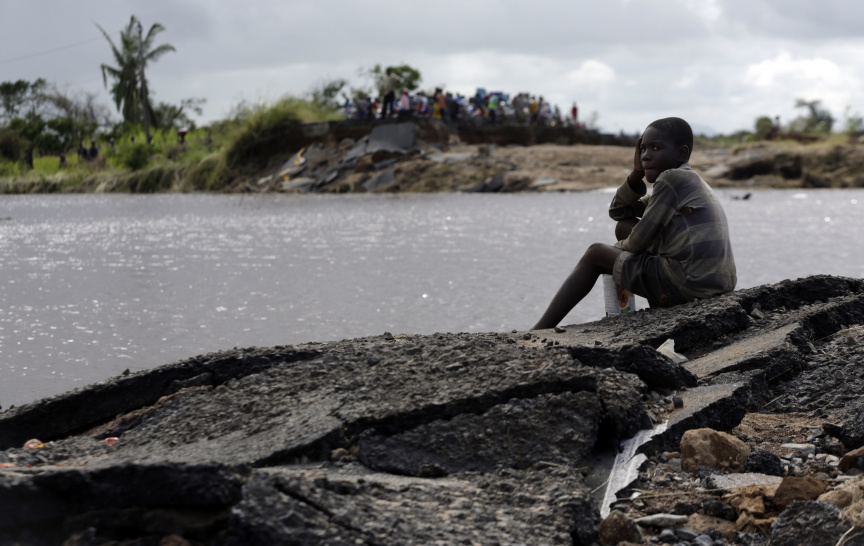 A young boy sits on the edge of a collapsed bridge in Nhamatanda, about 100km west of Beira, Thursday, March 21, 2019. (AP Photo/Themba Hadebe)

Aid agencies and several governments continued to step up their deployments, with helicopters in short supply for hundreds of thousands of people displaced by the cyclone.

Spokesman Herve Verhoosel of the World Food Program told reporters in Geneva of the "alarming news" that the Marowanyati dam in Zimbabwe was hit by heavy rains overnight, putting populations in the region at risk.

Zimbabwe's defense minister said more than 120 bodies had been washed into neighboring Mozambique, where residents there buried them, and more bodies were still being recovered in rivers, raising the official death toll in the country to at least 259.

"Most of the bodies were washed into Mozambique and because they were in a really bad state, they could not keep the bodies," Defense Minister Oppah Muchinguri said, speaking in the eastern city of Mutare. "So they ended up burying them."

Mozambique's environment minister, Celso Correia, who is heading up the government response team, said in Beira Thursday evening that the confirmed death toll in his country was 242, with at least 142 injured and an untold number still missing.

"Don't create panic," Correia urged other government officials as more updates on the devastation trickled in. He said some 65,000 people had been saved by rescue workers who plucked them from rooftops and trees, and 182,000 had been affected by the flooding.

"Obviously all numbers are preliminary. ... They are changing every day, every moment," Correia said, adding that the most worrying issue now was health, with cholera a major concern. He said a much bigger rescue and recovery mission must be launched in the region of some 350,000 people, where many remain marooned on islands created by the floodwaters.

It will be days before Mozambique's inundated plains drain toward the Indian Ocean and even longer before the full scale of the disaster is known. Mozambican President Filipe Nyusi has said as many as 1,000 people could have died in his country alone, but even that huge number is likely to pale in comparison to reality, aid workers said.

"Now that the water is receding, we fear that we will see even more," than 1,000, as far more bodies are discovered, the secretary-general of the International Federation of Red Cross and Red Crescent Societies, Elhadj As Sy, told The Associated Press.

Homes, villages and entire towns were submerged across central Mozambique, where flooding created a muddy inland ocean 30 miles (50 kilometers) wide. The U.N. food aid agency said 400,000 people were displaced and "in urgent need of life-saving assistance" in Mozambique's coastal city of Beira and flooded areas along the Pungue and Buzi rivers.

The persistent rains lifted in some areas on Thursday, and floodwaters began to recede in Beira, the worst-hit city, and in the countryside, according to a Mozambican government report.

"Yesterday, 910 people were rescued by the humanitarian community," said Caroline Haga of the International Federation of the Red Cross in Beira. She said 210 were rescued by five helicopters and 700 were saved by boats.

Aid groups were continuing to work non-stop to rescue families desperately clinging to tree branches and rooftops for safety from the surging waters.

"A family saw their brick house swept away from them. When they went to another house for safety, the roof collapsed," Machiel Pouw, Save the Children's response team leader in Mozambique, said in a statement. "Another family fled for safety in a tree. There are tens of thousands of heartbreaking stories like this, lives shattered over the past days."

In Malawi, where at least 56 people died, the government reported more than 920,000 people were displaced by the floods, the WFP said.

In Zimbabwe, 90 percent of the district of Chimanimani — the country's hardest-hit — was significantly damaged, the agency said, estimating that 200,000 people would need food assistance over the next three months.

Zimbabwe's President Emmerson Mnangagwa declared two days of mourning starting Saturday for the victims, saying he witnessed "unmitigated despair" during a tour of the area on Wednesday.  Government officials say as many as 350 Zimbabweans may have died in the flooding.

Aid has been slow to reach affected villagers due to collapsed infrastructure, although the military has been handing out small packets of cooking oil, maize meal and beans.

In Chimanimani, Philemon Dada began rebuilding his life in what was once a picturesque town. With a machete and a hoe, he salvaged poles from the mud to construct a hut to shelter his family, a first step in what he sees as a long and backbreaking journey to rebuild a life shattered by Cyclone Idai.

He is one of many villagers trying to pick up the pieces in Chimanimani after losing homes, livestock and, in many instances, family members. Some have been taken in by neighbors and others are sheltering with church pastors.

"I can say I am a bit lucky. My wife and son are still here with me but for everything else, I have to start from scratch," he said.

Dada had a few food items handed out by the Zimbabwe military, but he knew that wouldn't last long and he was eager to start growing crops again. Like many people here, he survives on agriculture.

"My bean crop was ready for harvesting before the cyclone, the maize was close. I am back to zero," he said.

He is particularly pained by his two prized bulls that did the heavy work of drawing the plow for his field. They died in the floods.

"It may take a year, maybe even more years just to get back on my feet," he said.