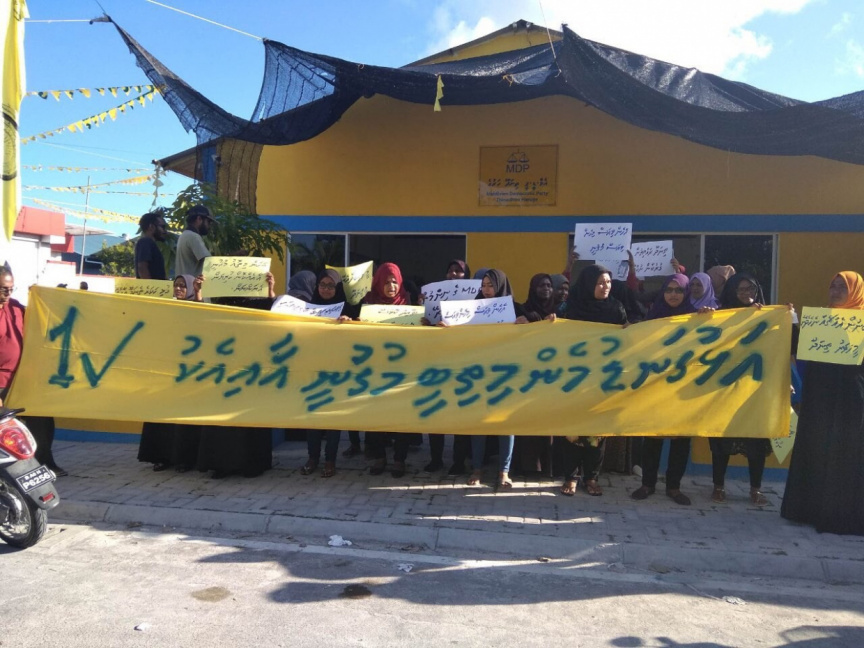 Group of MDP members demonstrate against the decision by MDP to withdraw support to parliamentary candidate Abdul Mughni on March 19, 2019 at G. Dh. Thinadhoo.

Maldivian Democratic Party (MDP)’s division at G. Dh. Thinadhoo has issued a decree urging the senior management of the party to reconsider its decision to withdraw support to its candidate for the North Thinadhoo parliamentary seat, Abdul Mughni.

MDP announced its decision to withdraw its support to Mughni last Monday. The decision was based on a serious allegation of domestic violence made against Mughni by his former wife.

The Thinadhoo division of MDP passed a decree last Monday night, condemning the decision by the senior management to withdraw support to one of its candidates “based on a tweet made by a single person” and “without any consultation with the division”

“Given that MDP has a strong internal democracy and a party in full possession of all its executive organs, we believe don’t believe selective members of the leadership have the authority to make such a decision irregularly,” reads the decree.

The decree was passed with the majority vote of three out of five senior members of the division who attended the meeting. Those who voted in favor of the decree includes the President of MDP’s Thinadhoo division.

Speaking to ‘Sun’ regarding MDP’s decision, Mughni said that the leadership was yet to officially inform him of its decision, and that he learnt about the decision from the press.

He said that he was concerned over such a decision being made without any prior inquiry.

“I haven’t been informed of any such decision. Neither have I been questioned by any of the internal organs within the party. They haven’t even, at the very least, asked me if it is indeed my ex-wife [who made the allegation]. I am very concerned over this decision made by the party without any word from me,” said Mughni.

The politician also denied the domestic violence allegation against him.

He said that he had been divorced from his ex-wife for 11 years, and that she had never filed any domestic violence charges against him either with the police or any court.

“They are blatant lies. She’s getting personal. To derive a political benefit to someone else,” said Mughni.

“It has been 11 years since my divorce from my former wife. I have never been hinted at any such case from the police or any other authority.”

6 arrests, but no sign of MVR 2.3M stolen in heist