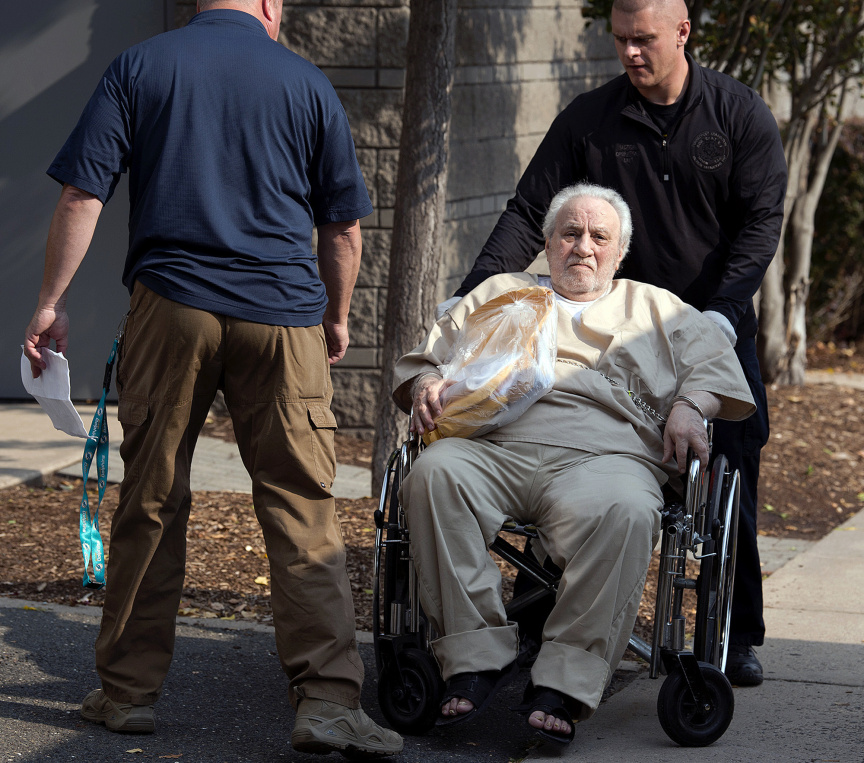 In this Sept. 5, 2017 file photo, Robert Gentile is wheeled into the federal courthouse in Hartford, Conn. (Patrick Raycraft/Hartford Courant via AP, File)

HARTFORD, Conn. (AP) — A reputed Connecticut mobster who federal authorities believe is the last surviving person of interest in the largest art heist in history criticized government officials Monday as he adjusted to being back home after finishing a four-year prison sentence for weapons crimes.

Robert Gentile, 82, also maintained he knows nothing about the unsolved theft of $500 million worth of art from the Isabella Stewart Gardner Museum in Boston in 1990. He was released from federal custody in the unrelated weapons case Friday.

"I had nothing to do with the paintings. It's a big joke," Gentile said in a phone interview from his Manchester home.

He also blamed federal prison officials for worsening health problems that have left him unable to get around except in a wheelchair, and he criticized law enforcement officials for seizing his money and damaging his home during a raid in the weapons case.

"I'm all crippled up. They had me in a bed for a year chained up," he said. "I should have never been in jail. It's a joke."

The federal Bureau of Prisons said in a statement that there was no evidence to support Gentile's claims of mistreatment. It said it cannot discuss inmates' medical conditions.

An FBI spokesman in New Haven declined to comment.

The art heist took place March 18, 1990, when two men masquerading as Boston police officers got into the museum by telling a security guard they were responding to a report of a disturbance, according to authorities. The guard and a co-worker were handcuffed and locked in the basement while the thieves made off with the art.

The missing pieces include Rembrandt's only known seascape, "Christ in the Storm on the Sea of Galilee," and Vermeer's "The Concert," one of fewer than 40 known paintings by the 17th-century Dutch painter.

The FBI told The Associated Press in 2015 that two suspects — both Boston criminals with ties to organized crime — were deceased.

Investigators believe the paintings moved through mob circles to Connecticut and Philadelphia, where the trail went cold, officials have said.

But Gentile, who will be on federally supervised release for the next three years, has publicly insisted he knows nothing about the theft or where the paintings are.

Federal agents have searched Gentile's home three times, including with ground-penetrating radar, in what Gentile's lawyer, A. Ryan McGuigan, believes were efforts to find the paintings and other evidence about the heist. The weapons charges were filed after authorities found several firearms at Gentile's home in 2016, which he was prohibited from possessing as a previously convicted felon.

Gentile was sentenced to more than two years in prison in 2013 for illegally selling prescription drugs and possessing guns, silencers and ammunition. In that case, prosecutors said federal agents found in Gentile's home a handwritten list of the stolen paintings and their estimated worth, along with a newspaper article about the museum heist a day after it happened.