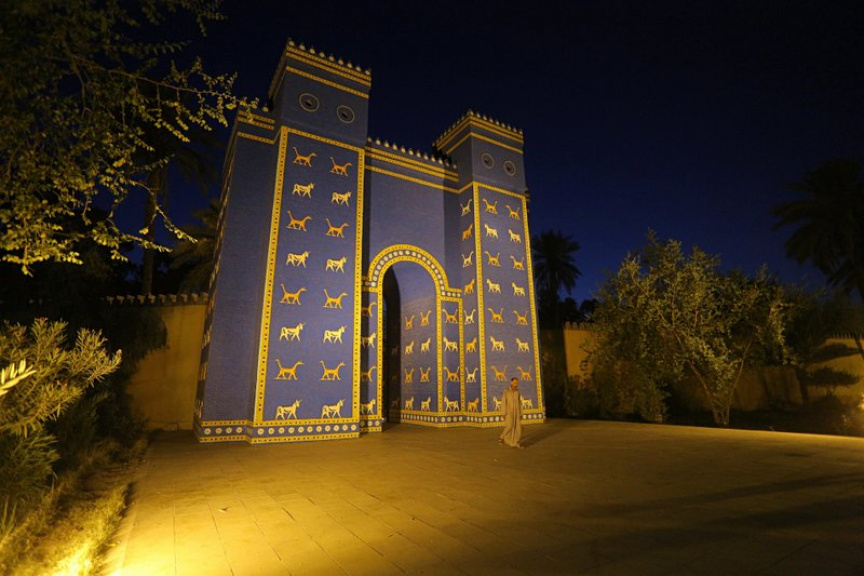 BAGHDAD (AP) — Iraq on Friday celebrated the UNESCO World Heritage Committee’s decision to name the historic city of Babylon a World Heritage Site in a vote held in Azerbaijan’s capital, years after Baghdad began campaigning for the site to be added to the list.

The city on the Euphrates River is about 85 kilometers (55 miles) south of Baghdad and once was a main tourist attraction before Iraq suffered one war after another in the past four decades.

The 4,300-year-old Babylon -- now mainly an archaeological ruin and two important museums -- is where dynasties have risen and fallen since the earliest days of settled human civilization.

King Hammurabi wrote his famous code of laws in Babylon, while Nebuchadnezzar sent his vast army from the city to Jerusalem to put down an uprising and bring the Jews back as slaves.

Some say Alexander the Great, who led his army out of Macedonia to conquer most of the known world, died here in 332 B.C.

Dozens of Iraqis waving their national flag gathered at the Ishtar Gate at the site celebrating their city’s new international status.

Iraqi Prime Minister Adel Abdul-Mahdi described the vote as “another victory for the Iraq of civilizations that was and will always be a lighthouse to the world.”

President Barham Saleh tweeted that after Babylon, more ancient sites will be added to the list through which “Iraq will restore that status that it deserves.”

The vote came years after the Islamic State group damaged another Iraq World Heritage site in the country’s north, the ancient city of Hatra. The extremists also destroyed other sites in Iraq, including Nimrud where giant winged bulls that once stood sentry at the nearly 3,000-year-old palace were hacked to pieces.

Along with Babylon and Hatra, Iraq has three other sites of World Heritage, the archaeological city of Samarra in central Iraq, Ashur in the north and the citadel of the northern city of Erbil.

UNESCO said in its statement that Babylon’s “remains, outer and inner-city walls, gates, palaces and temples, are a unique testimony to one of the most influential empires of the ancient world.”

“The city’s association with one of the seven wonders of the ancient world_the Hanging Gardens_has also inspired artistic, popular and religious culture on a global scale,” UNESCO said.

Nighttime mortar attack on US Embassy in Baghdad

Iraqis rally against US troops, demanding they leave