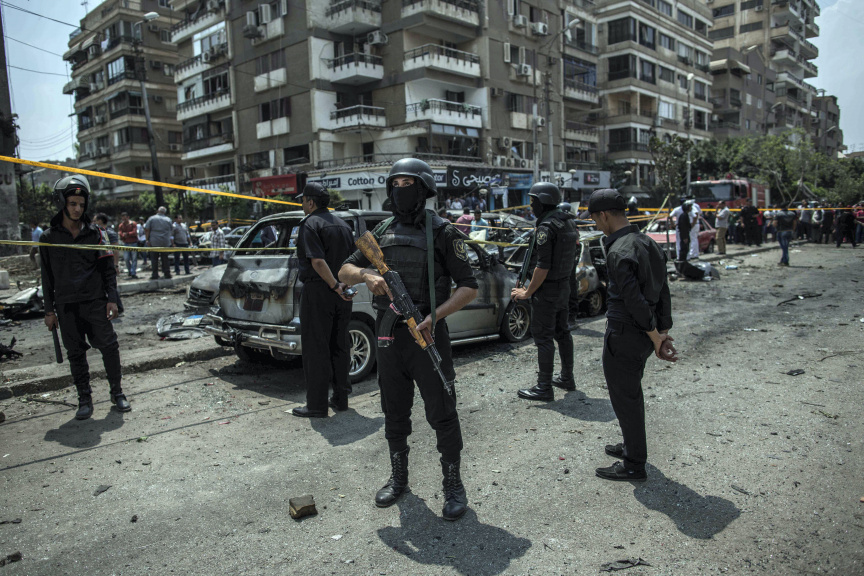 In this June 29, 2015 file photo, Egyptian policemen stand guard at the site of a bombing that killed Egypt's top prosecutor, Hisham Barakat, who oversaw cases against thousands of Islamists, in Cairo. (AP Photo/Eman Helal, File)

The nine were found guilty of taking part in the bombing that killed Hisham Barakat, the first assassination of a senior official in Egypt in a quarter century. Barakat was also the most senior official killed since the military overthrew an elected but divisive Islamist president in 2013.

The officials, who spoke on condition of anonymity because they were not authorized to brief media, said the families of the men were told to pick up their bodies from a Cairo morgue.

A total of 15 people have been executed in Egypt since the start of the year. Three were hanged earlier this month for their involvement in the 2014 killing of a judge's son in the Nile Delta town of Mansoura. Authorities executed another three for killing a police officer in Cairo in September 2013. Rights groups decried the executions, saying the men were sentenced to death following torture and beatings to extract confessions.

According to rights groups, authorities have executed at least 165 people since July 2013, including at least 32 between January and November 2018.

By carrying out the executions, Egypt demonstrated an "absolute disregard for the right to life," said Najia Bounaim, North Africa campaign director for Amnesty International.

"The international community must not stay silent over this surge in executions. Egypt's allies must take a clear stand by publicly condemning the authorities' use of the death penalty, the ultimate cruel, inhuman and degrading punishment," she said.

The London-based group on Tuesday had called on Egypt to halt the latest executions, saying that some defendants said they were forcibly disappeared and confessed under torture.

Egypt's highest appeals court upheld the death sentences in November. It commuted six other death sentences to life in prison. Death sentences were also handed down in 2017 to 13 defendants tried in absentia. They will be eligible for a new trial if they surrender or are captured. Turkey deported one of the 13 last month.

The Muslim Brotherhood was Egypt's best-organized opposition movement for decades and won a series of elections after an Arab Spring uprising in 2011 ended President Hosni Mubarak's nearly three-decade rule.

But President Mohammed Morsi, a senior Brotherhood figure elected in 2012, proved divisive, and the military removed him from power amid mass protests against his rule a year later.

Since then, authorities have waged an extensive crackdown on Islamists, arresting and detaining thousands and sentencing them to harsh prison terms. The Brotherhood has been banned and declared a terrorist group.

The assassination of Barakat recalled one of Egypt's darkest chapters, when Islamic militants and the state security apparatus engaged in retaliatory killings for nearly a decade starting in 1990. That year, the militants gunned down Parliament speaker Rifaat el-Mahgoub in Cairo, the last assassination of a senior official. There were attempts against other ministers until the insurgency was crushed in the late 1990s.

Also on Wednesday the military said in a statement that security forces killed eight suspected militants and destroyed seven hideouts and weapons depots and two car bombs in the restive north of Egypt's Sinai Peninsula.

The military statement gave no time frame for the recent operations. It wasn't possible to independently confirm the details as access to northern Sinai is heavily restricted.

Egypt has been battling Islamic militants for years. Last year, the government launched a broad security operation focused on northern Sinai, where an Islamic State affiliate has carried out many attacks in recent years.

Egyptian women get 2 years in prison for TikTok video

US student released after 486 days in Egypt prison