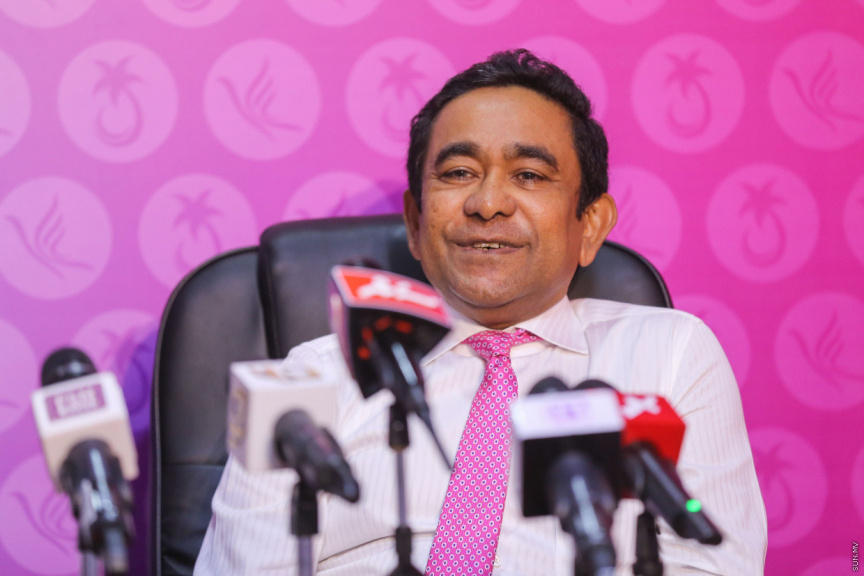 Progressive Party of Maldives (PPM) made the decision to withdraw its candidates from contention for the parliamentary elections and endorse Jumhoory Party (JP)’s candidates for the districts in an effort to prevent Maldivian Democratic Party (MDP) from gaining majority at the Parliament, says Leader of PPM and former Maldivian President Abdulla Yameen Abdul Gayoom.

Speaking to attendees of a PPM campaign event in L. Maavah over the phone last Saturday night, Yameen acknowledged discontent within PPM over the decision.

He said that MDP gaining majority at the Parliament could prove “very dangerous” to the country, and that the decision therefore had been necessary.

“MDP securing a majority will be very dangerous for Maldives. It’s not dangerous for me alone. No doubt, they are currently incessantly attacking me. But if they secure a majority at the new Parliament assembly, a great many things will change,” said Yameen.

He said that the Maldives, under the rule of the current administration, was riddled with lack of unity and patriotism as well as expression of anti-Islamic.

He said that Maldives was losing its values, and said that MDP must be stopped from gaining majority at the Parliament at all cost.

PPM has withdrawn tickets issued to a number of its candidates in a bid to endorse JP candidates itself.

However, Leader of JP, Qasim Ibrahim, too, echoed Yameen’s sentiments during a JP gathering Saturday night and spoke about preventing MDP from gaining majority at the Parliament.

Luthufy under investigation for money laundering