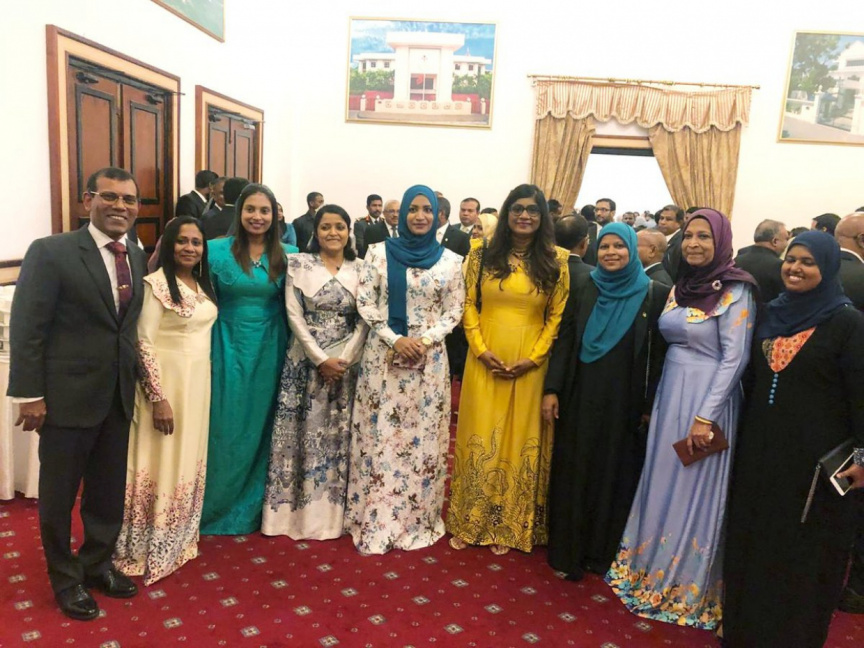 Former Maldivian President Mohamed Nasheed (L) poses for a picture with a group of female members of the Cabinet and Parliament. (Photo/Twitter/Anara Naeem)

President Ibrahim Mohamed Solih has pledged to increase the number of women in executive positions and expand the role of women in decision-making.

Speaking during his address to the Parliament at its inaugural sitting this Thursday, Solih stressed that women constituted for 50 percent of the population, and said the administration’s policies will be designed to address grievances of women and challenges faced by women.

Solih’s Cabinet, when it was inaugurated in 2018, made history.

7 out of 19 members of the Cabinet are women – making up for 35 percent of the total Cabinet. It also marked the appointment of the first female Minister of Defense of Maldives.

Solih, during his address, noted the achievement, but warned on the long road ahead to achieve greater gender equality.

“While fully acknowledging that we have a long way to go in improving the role of women in politics and public policy, the Government will work towards that goal with resolve,” he said.

Solih stressed that the future generation of the nation’s women needed to be brought up in a land of equal opportunities.

“We need our daughters to be brought up in an environment ripe with equal opportunities. I want to assure that our policies shall be aimed at eradicating the difficulties faced by women in social and economic participation, financial empowerment and just treatment in the face of the law,” he said.

Ambassador of the EU calls on Minister Shahid