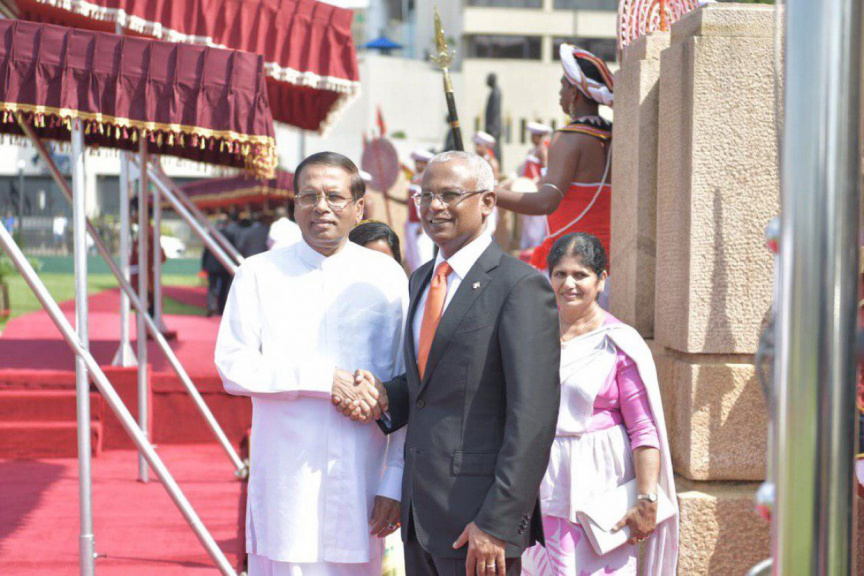 Maldivian President Ibrahim Mohamed Solih, who is currently in Sri-Lanka for a three-day state visit at the invitation of Sri Lankan President Maithripala Sirisena, has engaged in official bilateral talks with senior officials of the Sri Lankan government.

The talks took place at the Presidential Secretariat following the official welcoming ceremony for Solih and First Lady Fazna Ahmed this Tuesday afternoon.

Solih and First Lady Fazna were escorted to the Presidential Secretariat by a motorcade and mounted escorts and cultural performers, where they were received by Sirisena and Sri Lankan First Lady Jayanthi Pushpa Kumari.

Solih and Sirisena ascended the dais, and the Sri Lankan army fired a 21-gun salute Solih’s honor, which was followed by the national anthem of the two countries and inspection of the honor guard accorded to him by the Sri Lankan tri-forces.

Following the ceremony, Solih and senior officials of the Sri Lankan government retired into the Presidential Secretariat where they conducted official bilateral talks.

After the talks, Solih attended a luncheon by Sirisena in his honor.

He is also scheduled to meet with former Sri Lankan President Mahinda Rajapaksa at the Hilton Hotel later this Tuesday evening.

Solih will conclude his state visit and return to Maldives later this Tuesday night.

Probe launched after girl assaulted inside a bookshop