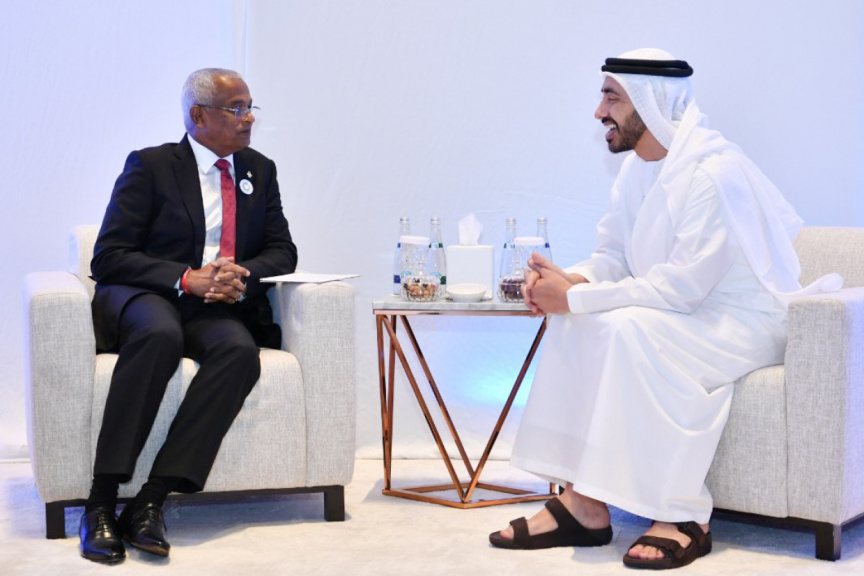 Maldivian President Ibrahim Mohamed Solih, is currently in UAE at invitation of the Crown Prince of Abu Dhabi and Deputy Supreme Commander of Armed Forces of UAE, Sheikh Mohammed Bin Zayed Al Nahyan to attend the Zayed Sustainability Awards Ceremony and the Inauguration of the Abu Dhabi Sustainability Week.

Sheikh Abdullah Bin Zayed Al Nahyan noted that Maldives was a strong advocate for the threat of climate change and global warming, and pointed out the need to minimize CO2 emissions in the country to strengthen its stance and set a better example.

Meanwhile, President Solih said he was honored to receive invitation to attend the Zayed Sustainability Awards Ceremony and the Inauguration of the Abu Dhabi Sustainability Week, and said Maldives had much to learn from the empowering projects presented at the event.

He also noted that a school in Maldives, the Addu High School won the Zayed Future Energy Prize in 2015.

The school was awarded for or its achievements in promoting renewable energy and sustainability after installing a 2.8kW solar project in 2014 using funds from the UN’s Global Environment Facility Small Grants Program.

UAE made a visa-free destination for Maldivians