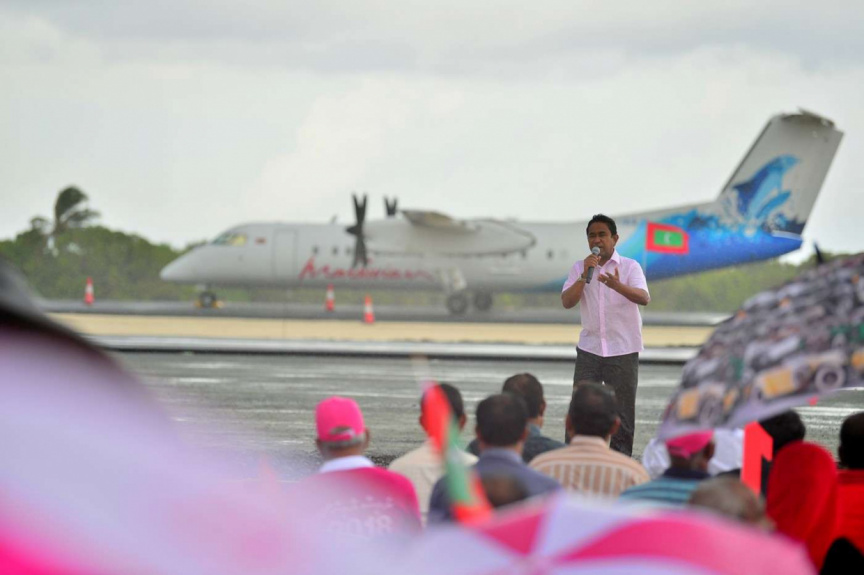 A Maldivian Airlines aircraft is seen in the background as Leader of PPM, former Maldivian President Abdulla Yameen Abdul Gayoom delivers a speech at H. Dh. Kulhudhuffushi during a campaign tour on September 21, 2018. (File Photo/President's Office)

Maldivian Airlines has filed a MVR 3.8 million lawsuit against Progressive Party of Maldives (PPM) for failure to settle the payment for chartered flights during presidential campaign.

Former ruling party, PPM had chartered flights on credit of MVR 4.8 million from Maldivian Airlines to transport its supporters from across Maldives for its Mass Size Function during the presidential campaign in November.

PPM had later paid MVR 1 million of the credit when the news broke on local media.

Managing Director of Island Aviation – which runs Maldivian Airlines, Mohamed Rizvee reported to ‘Sun’ this Thursday that the company has filed a lawsuit against PPM for the MVR 3.8 million which remains to be settled.

The company had also requested Elections Commission to settle the credit using outgoing State funds to PPM. But EC had denied the request, saying such an arrangement would be irregular.

2,000 PPM supporters were transported to Male’ City for the Mass Size Function on chartered flights.