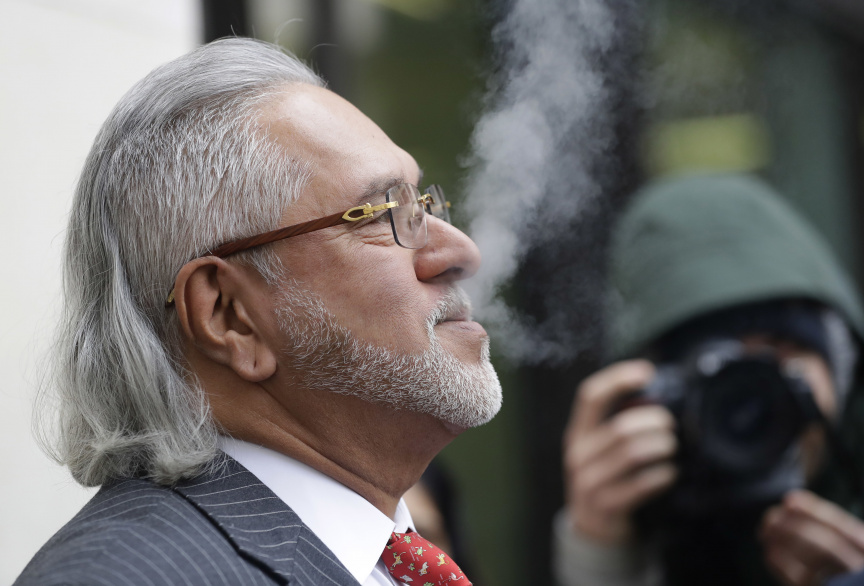 Judge Emma Arbuthnot Monday endorsed the Indian government's request for Mallya's extradition and said she would send the case to Britain's Home Secretary for review and action.

Mallya, who in 1983 became chairman of an alcohol company once led by his father, was a leading figure among India's business elite. He launched Kingfisher Airlines and had an ownership stake in India's Formula One racing team.

Mallya is accused by India of money laundering and conspiracy involving hundreds of millions of dollars. He has denied wrongdoing.

Arbuthnot said there were substantial misrepresentations in Mallya's accounting of his financial dealings that gave weight to the Indian government's request for his return.

The judge described the 62-year-old Mallya in unusually personal terms, suggesting Indian banks might have been fooled into making bad loans by "this glamorous, flashy, famous, bejeweled, bodyguarded, ostensibly billionaire playboy who charmed and cajoled these bankers into losing their common sense."

The judge said the tycoon's companies were in "desperate" financial situations that were concealed from the banks and suggested that time in prison custody might lead Mallya to reduce his alcohol consumption.

Mallya can still appeal the ruling, which was made in Westminster Magistrates' Court. He remains free on bail, but the judge told Mallya she would "take your money away" if he failed to show up for future hearings.

Speaking to a handful of reporters after caucusing with his lawyers, Mallya seemed unperturbed by the adverse decision, saying the ruling was "just the first step" and the legal process still had "a way to go."

He refused to say if he would appeal, stating his lawyers needed to analyze the judge's lengthy written statement first. He did not try to rebut Arbuthnot's characterization of him, though he said she missed some important financial points.

"OK fine, she came to her conclusion, we'll take it from there," he said. "No reaction. Disappointing that the judge found a prima facie case."

The judge said Mallya suffers from multiple medical problems, including coronary artery disease, but she denied his claim that he could not receive adequate medical care in prison in India.

Arbuthnot did suggest he be allowed to be treated by his own doctors and that the Indian government should provide him with the array of medications he needs. She said prison doctors and nurses would have their hands full dealing with Mallya's various maladies.

The judge said his prison cell in India would have adequate natural light, a bathroom with a shower, fans for ventilation, and a sleeping pad. She said he would have access to ample water supplies as his doctors had requested.

She also said he could make a "medical request" for installation of a bed in his prison cell if supported by documentation.

Mallya said after the ruling that India has some of the best doctors in the world but he is concerned about whether he would have access to them while he is in prison.

He showed no emotion and drank from a plastic water bottle when the ruling was announced.