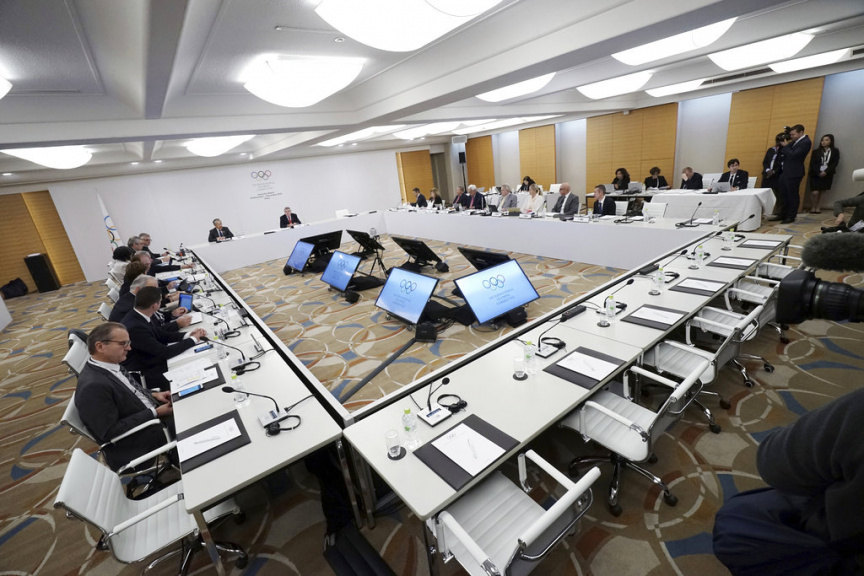 International Olympic Committee (IOC) President Thomas Bach, second from left in back, and other members attend an IOC Executive Board meeting in Tokyo Friday, Nov. 30, 2018. The focus of the meeting was a decision on what to do with boxing’s corruption-plagued international federation. (AP Photo/Eugene Hoshiko)

TOKYO (AP) — The International Olympic Committee ordered an inquiry Friday into the amateur boxing federation, which elected an alleged heroin trafficker as president four weeks ago.

The IOC said AIBA cannot contact organizers of the 2020 Tokyo Olympics during the inquiry.

IOC spokesman Mark Adams said the inquiry into finance, governance and ethics by a three-member panel "can lead to the withdrawal of recognition" of AIBA. The full IOC membership next meets in June in Lausanne, Switzerland.

One option for the IOC is to organize an Olympic boxing tournament, including qualifying, outside of AIBA's control.

AIBA member federations voted for Gafur Rakhimov of Uzbekistan as president in Moscow on Nov. 3 despite being on a U.S. Treasury Department sanctions list.

The American federal sanctions bar U.S. citizens and companies from doing business with him.

IOC sports director Kit McConnell said the Olympic body is concerned because AIBA has been struggling to open or maintain bank accounts in Switzerland. AIBA is based near IOC headquarters in Lausanne.

During the IOC-appointed inquiry, the Tokyo Olympic boxing program will be frozen: No tickets will be sold, no test event held and no qualifying format approved. The IOC had previously suspended payments to AIBA from Olympic revenues.

The inquiry will be chaired by IOC board member Nenad Lalovic, the Serbian president of wrestling's governing body. It includes IOC member Richard Carrion of Puerto Rico and IOC athletes commission member Emma Terho, an Ohio State graduate who represented Finland in hockey at previous Olympics.

Protecting the sport and boxers preparing for the Tokyo Olympics was the IOC's priority, McConnell said.

"They are the focus of everything we are doing here," he said.

Germany and Netherlands to meet in Euro 2020 qualifying