Germany and Netherlands to meet in Euro 2020 qualifying 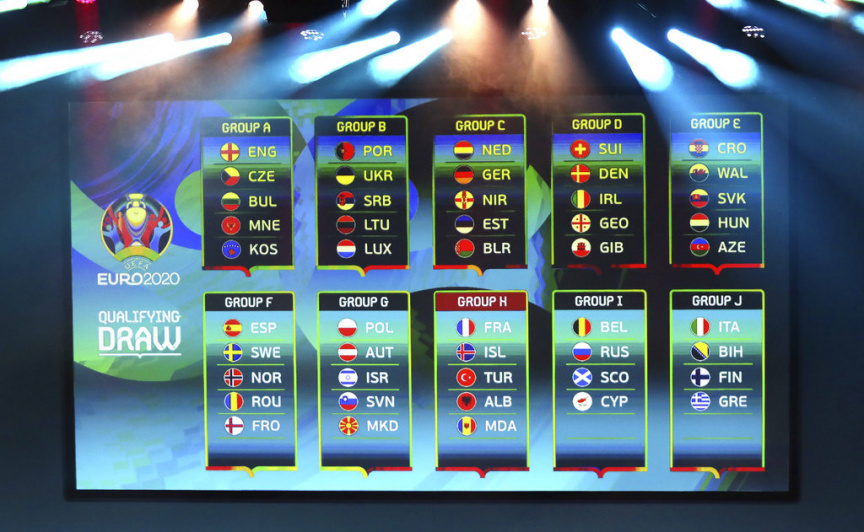 The qualifying groups are shown on the video screen during the UEFA Euro 2020 European soccer championship qualifying draw at the Convention Centre in Dublin, Ireland, Sunday, Dec. 2, 2018. (AP Photo/Peter Morrison)

"I wasn't happy because they are strong," the Netherlands coach said at the 2020 European Championship qualifying draw on Sunday. "Germany is also not happy with Holland I think."

The two leading countries being together in Group C was only possible because Germany was relegated last month from the top tier of the UEFA Nations League and had a lower seeding in the Dublin draw. It capped a miserable year for Germany that saw the world champions deposed with a group-stage exit in Russia in June.

The Netherlands were the architects of Germany's downfall in the Nations League, claiming a win and draw against Joachim Loew's team to reach the Final Four of European soccer's new national team competition next June.

After failing to qualify for Euro 2016 and the 2018 World Cup, the Dutch are resurgent with a young side under the command of Koeman, who won Euro 1988 as a player.

"The development of the team is really positive," Koeman said. "(Fans) have a lot of belief in the team."

While Group C appears challenging, the other teams are Northern Ireland, Estonia and Belarus, with the top two qualifying automatically.

For the first continent-wide European Championship, none of the 12 host countries has guaranteed entry to the finals. Amsterdam's Johan Cruyff Arena and Munich's Allianz Arena are both venues.

Usually staged in one or two nations, UEFA distributed games across Europe to celebrate 60 years of the competition after finding it tough to find a single suitable host.

The tournament will open in Rome on June 12 before ending in London at Wembley Stadium, which will stage both semifinals and the final on July 12.

England has a seemingly smooth path to the finals, when it will host two games in the group stage at Wembley and then could lift the trophy at its national stadium.

Gareth Southgate's side, which this year unexpectedly reached the World Cup semifinals and advanced to the Nations League Final Four, was drawn alongside Czech Republic, Bulgaria, Montenegro and Kosovo.

"We are improving as a team and we have huge motivation to get to the finals because we are a host city," Southgate said.

Having declared independence from Serbia in 2008, Kosovo is in European Championship qualifying for the first time. British troops were part of a NATO force deployed in Kosovo in 1999 after the alliance bombed Serbia to stop its crackdown against Kosovo's ethnic Albanian separatists.

"When England come to Pristina it will be the biggest event in the history of football in Kosovo," Kosovo coach Bernard Challandes said.

Ireland, which qualified for the last two Euros, has games in the group stage and Round of 16 in Dublin. The hosts of Sunday's draw were paired with Switzerland, Denmark, Georgia and Gibraltar.

Croatia, which reached the World Cup final for the first time in July, is with Wales, Slovakia, Hungary and Azerbaijan. The Azerbaijani capital Baku has group stage and a quarterfinal match in 2020.

Spain is using Bilbao in the group stage and last 16 at the 2020 tournament. In qualifying, the 2008 and 2012 European champions are with Sweden, Norway, Romania, Malta and the Faeroe Islands.

This is the only group without any 2020 host country: Poland, Austria, Israel, Slovenia, Macedonia and Latvia.

France, which won the World Cup in July and lost the Euro 2016 final on home soil, is in qualifying with Iceland, Turkey, Albania and Moldova.

Belgium, FIFA's top-ranked team that reached the World Cup semifinals, will return to Russia in Group I and also face Scotland, Cyprus, Kazakhstan and San Marino.

Italy, which failed to qualify for the World Cup, is in Group J with Bosnia-Herzegovina, Finland, Greece, Armenia and Liechtenstein.

The 24-team lineup will be completed in March 2020 when the last four places at the tournament are decided through a new playoff system.

Four teams from each of four Nations League tiers that were completed last month will play in a mini-tournament featuring semifinals and a final. If one of the Nations League group winners have already secured a spot, the next-best team in that tier will make the playoffs.

It is separate from the Nations League Final Four in June 2019.