Audio leaked, of Nasheed saying that he was told by CMAG that the government was not changed through a coup 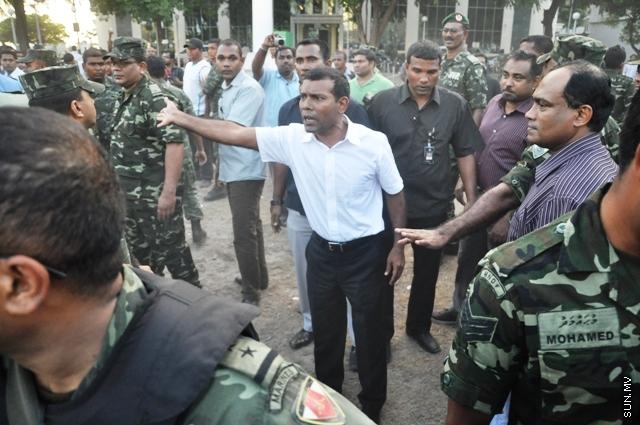 An audio clip has been leaked of former President Mohamed Nasheed, in which he is heard saying that he was told by the Foreign Ministers who visited Maldives through the Commonwealth Ministerial Action Group (CMAG), that the change of government in February this year did not involve a coup.

Nasheed is heard saying that the Foreign Ministers of Barbados and Bangladesh, and the Foreign Secretary of Australia told him after three days of investigation that the government was not changed through a coup.

“They then asked me what they should do next. Of course, they know me in more capacities than one,” says Nasheed.

It is not known who Nasheed was talking with in the 32-minute audio clip leaked by DhiTV.

“I asked them, if they decide that that’s what happened, what will I do next? The entire opposition of this country will go to prison,” says Nasheed.

Maldivian Democratic Party (MDP) International Spokesperson and Henveiru Dhekunu MP Hamid Abdul Gafoor said that he was not informed of any such leaked video.

Nasheed said in his resignation speech on 7 February that the reason for his resignation was to save the country from further damage, and to protect the Maldivian government from the international pressure it may face if he remained as President.

He said that he decided to resign out of concern and compassion for the Maldivian people.

After his resignation, however, he has been accusing that he was forced to resign under duress.

Piece of Kaaba cover cloth given as gift to Maldives