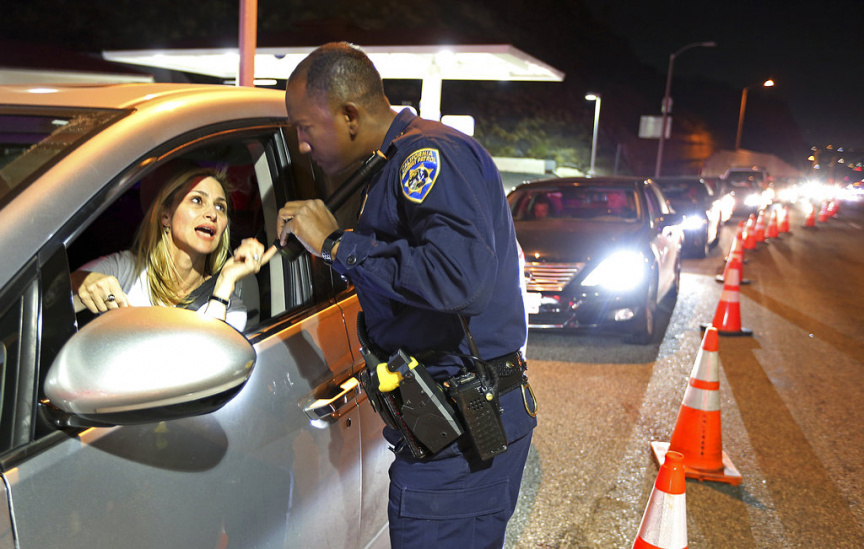 California Highway patrol Officer S. Kizito verifies that a woman seeking to return to Malibu in Southern California is an actual resident after Woolsey Fire evacuation orders were lifted for the eastern portion of the city Tuesday evening, Nov. 13, 2018. (AP Photo/Reed Saxon)

MALIBU, Calif. (AP) — More residents were allowed Friday to return to homes they fled during the rapid spread of Southern California's huge wildfire.

Authorities reopened more areas in Los Angeles and Ventura counties, but kept some locations within the Woolsey Fire zone off-limits due to hazards ranging from burned power poles to compromised gas lines and destroyed roadways.

A boil water order for one part of Malibu was lifted, but disinfection of water was still required in other areas.

Although walls of flame and towering columns of smoke were gone, firefighters continue to expand containment lines around the scorched area. Fire commanders said the 153-square-mile (396-square-kilometer) burn area was 69 percent surrounded.

With 57 percent of damage assessments complete, the count of destroyed structures reached 616. Another 183 structures were damaged.

Los Angeles County sheriff's detectives were investigating three deaths. Two adults were found in a gutted car last week, and the remains of a person were found Wednesday in the rubble of a home that had burned to the ground.

Firefighters were keeping an eye on unburned islands of vegetation within the perimeter and on torched structures to prevent smoldering material from reviving the fire.

Weather was cooperating. The strong, dry Santa Ana winds that fanned flames into a firestorm last week were gone, and forecasts called for a return of night through morning low clouds and fog to the coast and some valleys.

Long-range models were inconsistent, but there was a possibility of some rain Wednesday and Thursday, the National Weather Service said.

In another positive development, another large wildfire that broke out in Ventura County on Nov. 8, the same day as the Woolsey Fire, was declared 100 percent contained.

The cause of the Hill Fire remained undetermined, but Cal Fire said investigators had been able to rule out all potential causes other than human activity.