Fires scorch Spain and France, where flames reach the beach 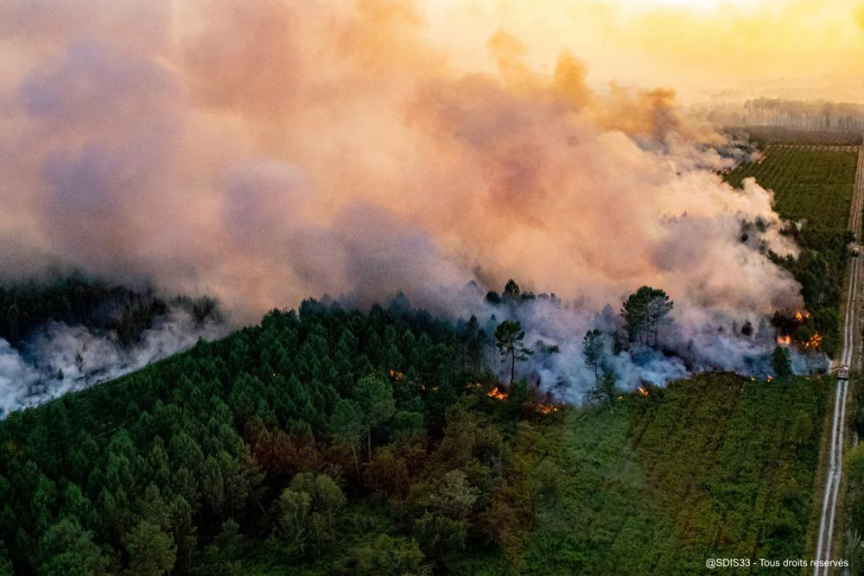 This photo provided by the fire brigade of the Gironde region (SDIS 33) shows a wildfire near Landiras, southwestern France, Saturday July 16, 2022. (SDIS 33 via AP)

PARIS (AP) — Firefighters battled wildfires raging out of control in Spain and France, including one whose flames reached two popular Atlantic beaches on Sunday, as Europe wilted under an unusually extreme heat wave.

So far, there have been no fire-related deaths in France or Spain, but authorities in Madrid have blamed soaring temperatures for hundreds of deaths. And two huge blazes, which have consumed pine forests for six days in southwestern France, have forced the evacuation of some 16,200 people.

In dramatic images posted online, a wall of black smoke could be seen rolling toward the Atlantic on a stretch of Bordeaux’s coast that is prized by surfers from around the world. Flames raced across trees abutting a broad sandy beach, as planes flew low to suck up water from the ocean. Elsewhere, smoke blanketed the skyline above a mass of singed trees in images shared by French firefighters.

In Spain, firefighters supported by military brigades tried to stamp out over 30 fires consuming forests spread across the country. Spain’s National Defense Department said that “the majority” of its fire-fighting aircraft have been deployed to reach the blazes, many of which are in rugged, hilly terrain that is difficult for ground crews to access.

Fire season has hit parts of Europe earlier than usual this year after a dry, hot spring that the European Union has attributed to climate change. Some countries are also experiencing extended droughts, while many are sweltering in heat waves.

In Spain’s second heat wave of the summer, many areas have repeatedly seen peaks of 43 degrees Celsius (109 degrees Fahrenheit). According to Spain’s Carlos III Institute, which records temperature-related fatalities daily, 360 deaths were attributed to high temperatures from July 10 to 15. That was compared with 27 temperature-related deaths the previous six days.

Almost all of Spain was under alert for high temperatures for another day Sunday, while there were heat wave warnings for about half of France, where scorching temperatures were expected to climb higher on Monday. The French government has stepped up efforts to protect people in nursing homes, the homeless and other vulnerable populations after a vicious heat wave and poor planning led to nearly 15,000 deaths in 2003, especially among the elderly.

The fire in La Teste-de-Buch has forced more than 10,000 people to flee at a time when many typically flock to the nearby Atlantic coast area for vacation. French authorities have closed several spots to the public along that coast because of the fire, including La Lagune and Petit Nice beaches that the fire reached on Sunday, and Europe’s tallest sand dune, the Dune du Pilat.

A second fire near the town of Landiras has forced authorities to evacuate 4,100 people this week. Authorities said that one flank has been brought under control by the dumping of white sand along a two-kilometer (1.2-mile) stretch. Another flank, however, remains unchecked.

People who were forced to flee shared worries about their abandoned homes with local media, and local officials organized special trips for some to fetch pets they had left behind in the rush to get to safety.

Overall, more than 100 square kilometers (40 square miles) of land have burned in the two fires.

Emergency officials warned that high temperatures and winds Sunday and Monday would complicate efforts to stop the fires from spreading further.

“We have to stay very prudent and very humble, because the day will be very hot. We have no favorable weather window,” regional fire official Eric Florensan said Sunday on radio France-Bleu.

Some of the most worrisome blazes in Spain are concentrated in the western regions of Extremadura and Castilla y León. Images of plumes of dark smoke rising above wooded hills that have been baked under the sun have become common in several scarcely populated rural areas.

Drought conditions in the Iberian Peninsula have made it particularly susceptible to wildfires. Since last October, Spain has accumulated 25% less rainfall than is considered normal — and some areas have received as much as 75% less than normal, the National Security Department said.

While some fires have been caused by lightning strikes and others the result of human negligence, a blaze that broke out in a nature reserve in Extremadura called La Garganta de los Infiernos, or “The Throat of Hell,” was suspected to be the result of arson, regional authorities said.

Firefighters have been unable to stop the advance of a fire that broke out near the city of Cáceres that is threatening the Monfragüe National Park and has kept 200 people from returning to their homes. Another fire in southern Spain near the city of Malaga has forced the evacuation of a further 2,500 people.

The office of Spanish Prime Minister Pedro Sánchez announced that he will travel to Extremadura to visit some of the hardest-hit areas on Monday.

Hungary, Croatia and the Greek island of Crete have also fought wildfires this week, as have Morocco and California. Italy is in the midst of an early summer heat wave, coupled with the worst drought in its north in 70 years — conditions linked to a recent disaster, when a huge chunk of the Marmolada glacier broke loose, killing several hikers.