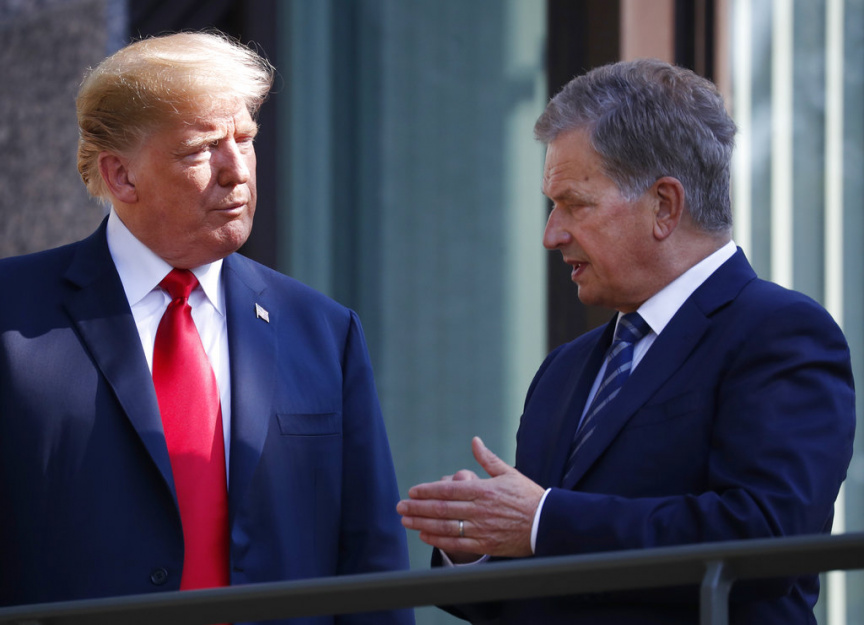 FILE - In this July 16, 2018 file photo, U.S. President Donald Trump, left, talks with Finnish President Sauli Niinisto as they pose for a photo in Helsinki, Finland. Niinisto said in an interview published on Sunday, Nov. 18, 2018 that he briefed Trump in the wake of the California wildfires on how the Nordic country effectively monitors its substantial forest resources with a well-working surveillance system. (AP Photo/Pablo Martinez Monsivais, File)

HELSINKI (AP) — Finland's president says that he briefed U.S. President Donald Trump amid the California wildfires on how the Nordic country effectively monitors its substantial forest resources with a well-working surveillance system.

President Sauli Niinisto said in an interview published Sunday in the Ilta-Sanomat newspaper that he told Trump during their brief meeting in Paris on Nov. 11 that "Finland is a country covered by forests but we also have a good surveillance system and network" in case of wildfires.

Trump said Saturday in northern California that wildfires weren't a problem in Finland because the Finns "spend a lot of time on raking" leaves and "cleaning and doing things."

Niinisto said he told Trump "we take care of our forests," but said that he can't recall anything being mentioned on raking.

Finland asks: Does a PM have a right to party?

Then one foggy Christmas Eve, reindeer got connected