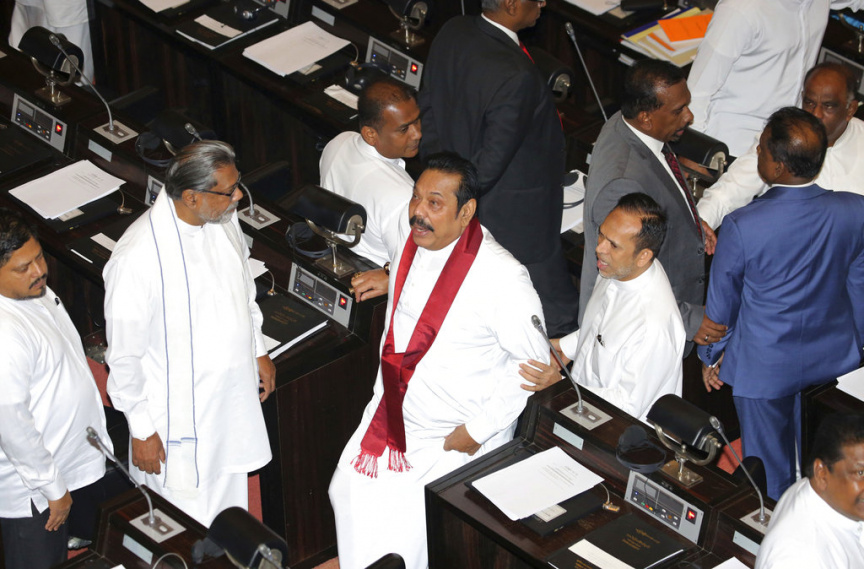 Disputed Prime Minister Mahinda Rajapaksa walks with other lawmakers inside parliament in Colombo, Sri Lanka, Friday, Nov. 16, 2018. Pandemonium reigned in Sri Lanka's Parliament as lawmakers supporting Rajapaksa violently demonstrated in the house to prevent the proceedings from taking place on Friday, a day after a fierce brawl between rival legislators. They threw books and chairs at police who escorted Speaker Karu Jayasuriya into the chamber and did not allow him to sit in the speaker's chair. Jayasuriya, using a microphone, adjourned the house until Monday. (AP Photo/Lahiru Harshana)

COLOMBO, Sri Lanka (AP) — The ousted Sri Lankan prime minister's party urged Facebook to safeguard the identity of its supporters on the social media platform, fearing information sharing with what it calls the country's "illegal" government can lead to a crackdown against the users.

In a letter to Facebook chief Mark Zuckerberg, the United National Party said such information could be used against the users "in ways which are legally prohibited."

Party spokesman Piyasena Dissanayaka said Sunday that Facebook blocked its official page ahead of a public rally on Thursday but restored it on Saturday.

"It is very likely that officials from the current illegal administration ... may ask Facebook for information on selected Sri Lankan users of Facebook that should rightfully be private," said the letter, sent on Thursday.

"Such requests may include information on named individuals, geo locations and other identification details of users who view and post on these pages," the letter said. "It is vital this information be safeguarded as the current illegal administration will most likely use these in ways which are legally prohibited."

Dissanayaka said Facebook officials had not yet responded to the letter.

Facebook said in an email to The Associated Press: "Facebook takes data protection and people's privacy very seriously and we have a responsibility to keep people safe on our services — whether from terrorism, bullying, or other threats. We also have a broader social responsibility to help bring people closer together — against polarization and extremism."

Prime Minister Ranil Wickremesinghe was sacked last month by President Maithripala Sirisena. Sirisena replaced Wickremesinghe with Mahinda Rajapaksa, who has had two no-confidence motions against him.

Lanka sends 2 ministers to Russia for oil amid crisis

UK leader has eye on rebellion as EU braces for Brexit