Supreme Court to issue its verdict on election at 1 pm 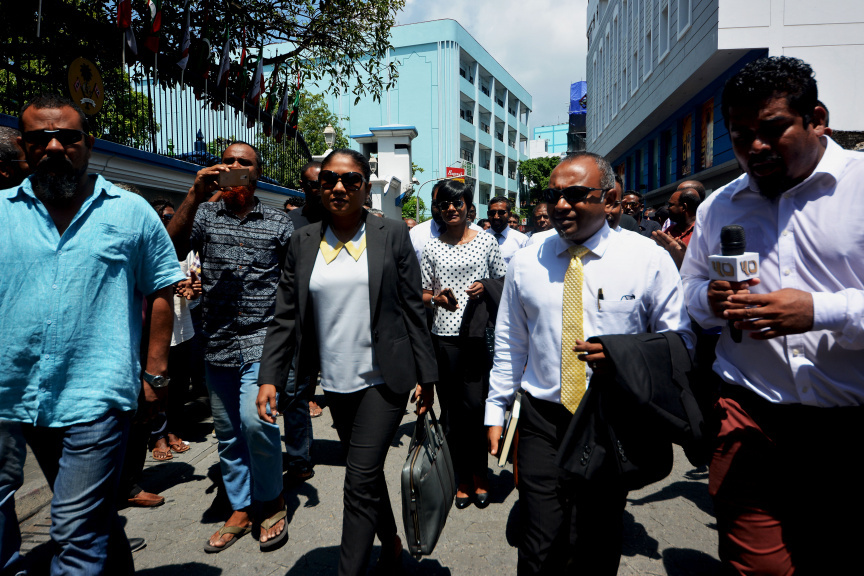 Lead attorney for the opposition coalition in the petition filed to nullify the results of the Presidential Elections 2018, Hisaan Hussain (C) pictured outside the Supreme Court. (Sun Photo/Ahmed Awshan Ilyas)

Supreme Court has scheduled its verdict on the petition filed by President Abdulla Yameen Abdul Gayoom to nullify the results of the recent presidential elections for 1 pm this Sunday.

The last hearing in the case was held last Tuesday during which the Bench announced its decision against hearing testimony from three anonymous witnesses put forward by Yameen to prove its allegations the Elections Commission used rings which could write on ballot paper and pens with ink which disappeared.

During closing arguments, EC’s attorney Hussain Shameem said the petition was based entirely on hearsay. And that hearsay cannot be used to disprove facts.

Hisaan Hassan, the attorney for the opposition coalition – the third party involved in the case – said Yameen’s attorneys had attempted to reverse the burden of proof during the legal proceedings. And repeated that they offered no proof to back their allegations.

EC and the opposition coalition has requested the Supreme Court determine there was no reason to nullify the results of the election, or investigate the election.