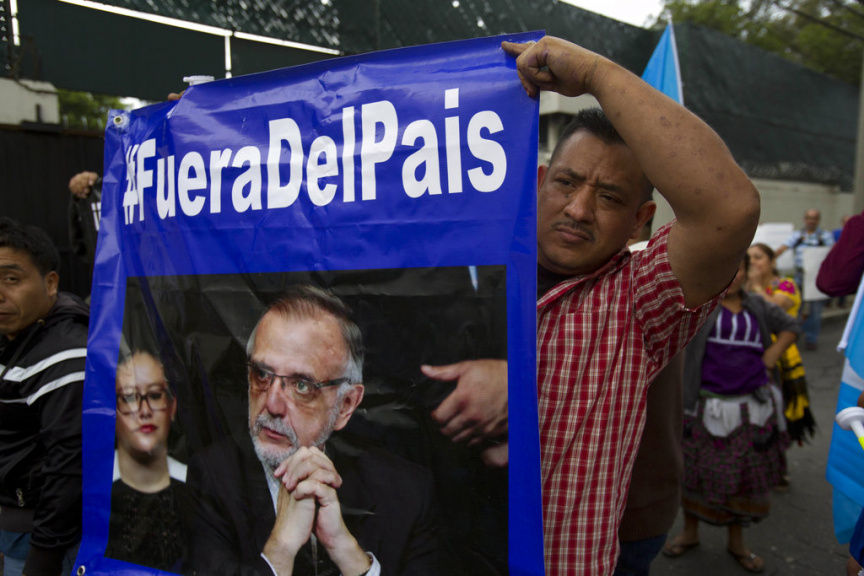 A man holds a banner with a message that reads in Spanish, "Out of the country" and an image of Ivan Velasquez, head of a U.N.-sponsored anti-graft commission, during a protest outside the United Nations International Commission Against Impunity, CICIG, headquarters in Guatemala City, Friday, Aug. 31, 2018. Guatemalan President Jimmy Morales announced that he is shutting down the commission that pressed a number of high-profile corruption probes, including one pending against the president himself over purported illicit campaign financing. (AP Photo/Moises Castillo)

GUATEMALA CITY (AP) — The head of a U.N.-backed commission probing corruption in Guatemala has been barred from re-entering the country, days after President Jimmy Morales decided not to renew the body's mandate.

A government statement says Morales has communicated the decision to the U.N. secretary-general and asked for him to name a replacement for Ivan Velasquez.

Morales announced last Friday that he would not renew the commission's mandate for another two-year term.

The commission known as CICIG for its initials in Spanish has pressed a number of high-profile graft investigations including against Morales and some of his associates.

Maldives elected for a third term at UNHRC

After focus on Ukraine, other concerns emerge at UN

Our world at peril: At UN, leaders push for solutions