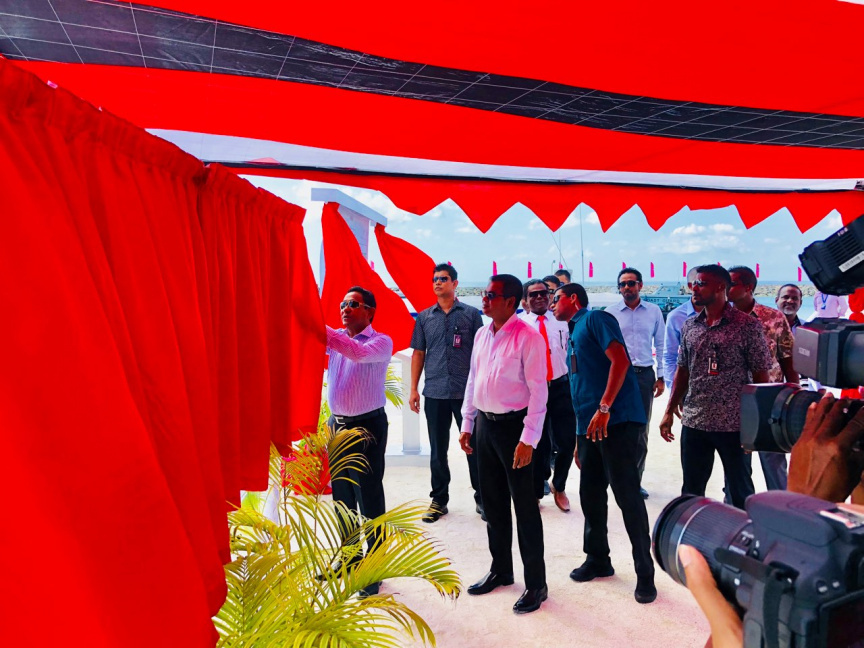 President Abdulla Yameen Abdul Gayoom unveils the monument placed to commemorate the completion of harbor and water services system at A. Dh. Dhangethi on September 3, 2018. (Photo/Ministry of Environment)

President Abdulla Yameen Abdul Gayoom has inaugurated the harbor built at A. Dh. Dhangethi and initiated water services on the island.

Dhangethi was Yameen’s first stop in his tour of several islands in A. Dh. Atoll, A. A. Atoll and Dh. Atoll which he embarked on this Monday morning.

The President was warmly received at Dhangethi.

The State spent MVR 51.7 million on the harbor developed at Dhangethi. Construction of the harbor was carried out by Maldives Transport and Contracting Company (MTCC), and it is 700-foot-long and 300-foot-wide with light fixtures and a pavement in a 1,070-foot area.

The water services system at Dhangethi was contracted by Ministry of Environment to Lucky Exports. The project cost MVR 25.8 million out of the State budget and now provides water services to 180 households on the island.

Protests in Dhangethi over transfer of health workers

MVR 15K stolen in break-in at STO pharmacy in Dhangethi