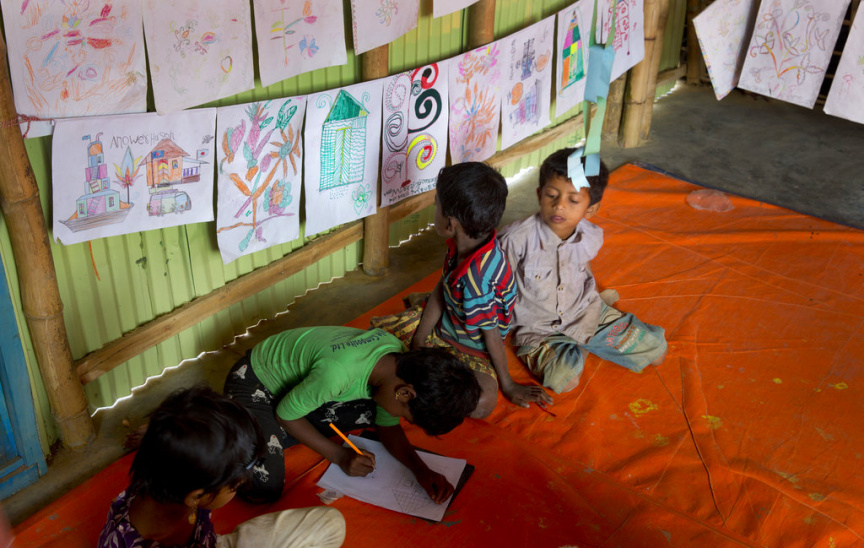 In this Jan. 21, 2018, photo, Rohingya refugee children draw and paint inside the makeshift school that is covered by murals at Kutupalong Refugee Camp. near Cox's bazar, Bangladesh. The school walls are covered with mural created by public art organization called Artolution, who collaborate with refugees to create large pieces of art and use art as therapy in conflict zones around the world. (AP Photo/Manish Swarup)

KUTUPALONG, Bangladesh (AP) — With his blond dreads tied in a ponytail and baggy jeans caked with paint smudges, Max Frieder first arrived at the cramped Rohingya refugee camps last December. Unlike many other foreigners, he wasn't an aid worker in one of the biggest camps for Myanmar's persecuted minority in southern Bangladesh.

His mission: bringing color and art to one of the most dismal places in the world.

Amid the sea of makeshift bamboo-and-tarp shelters dotting the rolling hills of Kutupalong, some huts are now painted over with colorful murals. Each mural is a collection of stories from the lives of Rohingya refugees and their hopes for the future.

Frieder and his partner Joel Bergner run a public art organization called Artolution. They've made hundreds of large-scale murals around the world, particularly with communities living in conflict zones, from Syrian refugee camps in Jordan and Lebanon to the Gaza Strip and Israel.

In Bangladesh, they spent several weeks interacting with children and other refugees interested in drawing and painting. They created more than a dozen murals spread across the expansive camps — covering schools, toilets and gathering spaces with a myriad of colors.

While hundreds of children, teenagers and entire families came together to participate in painting the murals, some refugees said they found their calling in art.

Hasina, 20, who covers her face in a veil in accordance to her Islamic faith and uses only one name, said she never thought women were allowed to draw and paint. She is now part of Artolution's group of local Rohingya artists who continue to make public art and work with children in the camps.

She said the paintings were therapeutic for children. "The Rohingya have suffered greatly in Myanmar. They (government soldiers) slaughtered mothers and shot people dead. When children see this art, they forget about all that and become happy instead," Hasina said.

Rohingya face official and social discrimination in predominantly Buddhist Myanmar, which denies most of them citizenship and basic rights because they are looked on as immigrants from Bangladesh, even though many of them settled in Myanmar generations ago. Dire conditions led more than 200,000 to flee the country between 2012 and 2015.

The latest crisis began last August after the Myanmar military crackdown on Rohingya Muslims in retaliation for an insurgent attack. The military responded with counterinsurgency sweeps and was accused of widespread human rights violations, including rape, murder, torture and the burning of Rohingya homes. Thousands are believed to have died and about 700,000 fled to Bangladesh. The U.N. and U.S. officials have called the government's military campaign ethnic cleansing.

As refugees complete almost a year of living in Bangladesh, with little hope of quick repatriation to their homes in Myanmar, few have found ways of earning a living. Most still rely on handouts from aid organizations working in the camps, including food, blankets and tarp.

A growing number of children, who make up more than 60 percent of the refugees, don't have enough schools to go to. They can be found selling packets of chips and cheap cigarettes at small makeshift shops or helping their family carry aid and care for other children.

Mohammad Hasan, another Rohingya who was trained by Frieder, said he feels proud when people in his community call him a painter. He believes learning to draw and paint is a means for his people to move on.

"If they can temporarily forget about their memories from Myanmar, they can use the happiness they get here and move forward with their lives," Hasan, 28, said. "Also, they are becoming perfect at drawing and painting."

Though the schools are rudimentary and immense efforts are needed to educate and rehabilitate Rohingya children in Bangladesh, the murals are bringing in more kids to spaces where they can learn, draw and play.

In May, Artolution joined hands with UNICEF to create an exchange mural, which was painted by children and other Rohingya in Kutupalong. It was later hand-carried to New York City, where it is now on display inside the World Trade Center transit hub known as the Oculus.

Frieder said almost half a million people now see the art created by Rohingya in New York every day. He believes the murals are making people aware, some for the first time, about the displacement of more than 900,000 Rohingya Muslims.

"I think people around the world have no idea who the Rohingya people are and what they are going through," he said. "These pieces of art, these stories that they create, are able to say, 'We are here, we exist.'"

Heron gets amusingly fooled by street art in Rinbudhoo

CBS looks into misconduct claims amid report on CEO