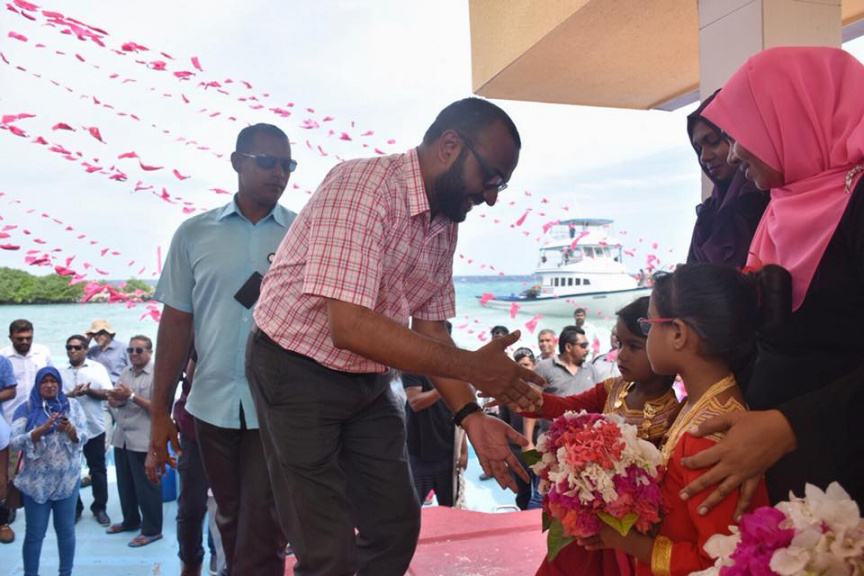 Dr. Mohamed Shaheem Ali Saeed received a warm welcome at his hometown of Maamendhoo on the campaign visit. (Photo/Facebook)

Running mate of the President Abdulla Yameen Abdul Gayoom at the Presidential Election this September, Dr. Mohamed Shaheem Ali Saeed, has received a warm welcome at his hometown of Maamendhoo on his campaign trip to Gaafu Alifu Atoll.

Dr. Shaheem arrived at Maamendhoo this morning to be received by a large number of supporters of President Yameen and Dr. Shaheem from the island.

An official on the delegation traveling with Dr. Shaheem told Sun Media that the PPM running mate is set to do a door-to-door campaign in Maamendhoo. And while Dr. Shaheem joined the Friday prayers today, he would also be joining the Salat ul-Khusuf tonight which is performed during the eclipse.

Before his visit to Maamendhoo today, Dr Shaheem visited Gaafu Alifu Dhaandhoo and Nilandhoo yesterday. On his visit to Dhaandhoo, Dr. Shaheem officially opened the PPM campaign hall on the island.

Dr. Shaheem began his campaign trip to Gaafu Alifu atoll on 19 July with a visit to Villingili.

Maamendhoo is the last stop on Dr. Shaheem's visit to Gaafu Dhaalu atoll and is set to retun to the capital tomorrow.