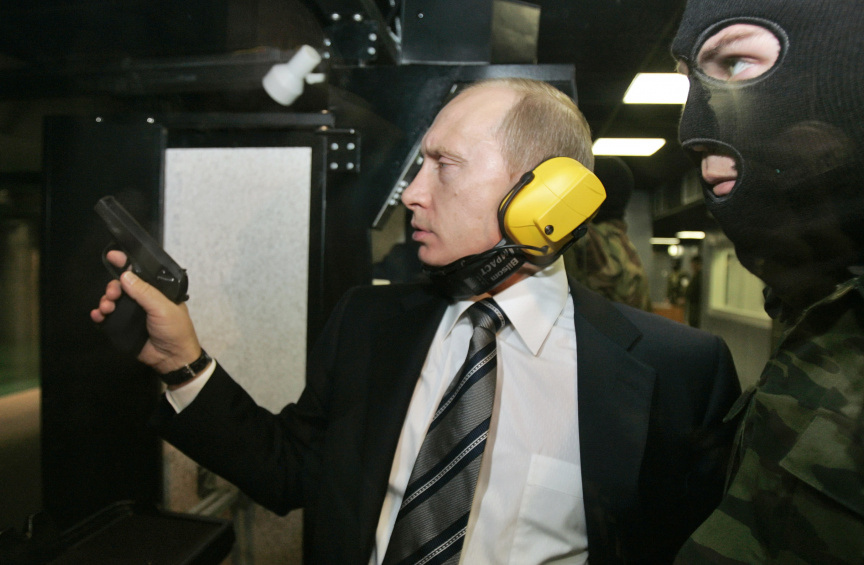 In this file photo taken on Wednesday, Nov. 8, 2006, President Vladimir Putin wears headphones as he tests a pistol in a shooting range as he visits the Defense Ministry's Main Intelligence Directorate in Moscow, Russia. The Justice Department has announced charges against 12 Russian intelligence officers for hacking offenses during the 2016 presidential election, it was announced on Friday, July 13, 2018. (Dmitry Astakhov, Sputnik, Kremlin Pool Photo via AP)

WASHINGTON (AP) — Twelve Russian military intelligence officers hacked into the Clinton presidential campaign and the Democratic Party and released tens of thousands of private communications in a sweeping conspiracy by the Kremlin to meddle in the 2016 U.S. election, according to an indictment announced days before President Donald Trump's summit with Russian President Vladimir Putin.

The 29-page indictment lays out how, months before Americans went to the polls, Russians schemed to break into key Democratic email accounts, including those belonging to Clinton campaign chairman John Podesta, the Democratic National Committee and the Democratic Congressional Campaign Committee. Stolen emails, many politically damaging for Clinton, appeared on WikiLeaks in the campaign's final stretch.

The charges say the Russian defendants, using a persona known as Guccifer 2.0, in August 2016 contacted a person in touch with the Trump campaign to offer help. And they say that on the same day Trump, in a speech, urged Russia to find Clinton's missing emails, Russian hackers tried for the first time to break into email accounts used by her personal office.

Mueller did not allege that Trump campaign associates were involved in the hacking effort, that Americans were knowingly in touch with Russian intelligence officers or that any vote tallies were altered by hacking. The White House seized on those points in a statement that offered no condemnation of Russian election interference.

It was unclear whether the indictment might factor into Trump's meeting with Putin on Monday.

Trump has repeatedly expressed skepticism about Russian involvement in the hacking while being accused by Democrats of cozying up to the Russian president. Trump complained about the Russia investigation hours before the indictment, saying the "stupidity" was making it "very hard to do something with Russia."

The Kremlin, meanwhile, denied anew that it tried to sway the election. "The Russian state has never interfered and has no intention of interfering in the U.S. elections," Putin's foreign affairs adviser, Yuri Ushakov, said Friday.

The indictment identifies the defendants as officers with Russia's Main Intelligence Directorate of the General Staff, also known as GRU. If that link is established, it would shatter the Kremlin denials of the Russian state's involvement in the U.S. elections, given that the GRU is part of the state machine.

The Russian defendants are not in custody, and it is not clear they will ever appear in American court, though the Justice Department has recently seen value in indicting foreign hackers in absentia as public deterrence.

The indictment accuses the Russian hackers, starting in March 2016, of covertly monitoring the computers of dozens of Democratic officials and volunteers, implanting malicious computer code known as malware to explore the networks and steal data, and sending phishing emails to gain access to accounts.

One attempt at interference came hours after Trump, in a July 27, 2016, speech, suggested Russians look for emails that Clinton said she had deleted from her tenure as secretary of state.

That evening, the indictment says, the Russians attempted to break into email accounts used by Clinton's personal office, along with 76 Clinton campaign email addresses.

By June 2016, the defendants, relying on fictional personas like DCLeaks and Guccifer 2.0, began planning the release of tens of thousands of stolen emails, the indictment alleges.

The Podesta emails published by WikiLeaks displayed the campaign's private communications, including deliberations about messaging that played into attacks that Clinton was calculating and a political flip-flopper. Private speeches she gave to financial industry firms were particularly damaging within the left wing of the Democratic party and among independents frustrated with the influence of Wall Street in politics.

The indictment alleges that Guccifer 2.0 was in touch with multiple Americans in the summer of 2016 about the pilfered material, including an unidentified congressional candidate who requested and then received stolen information.

On Aug. 15, 2016, the indictment says, Guccifer 2.0 reached out to someone in contact with the Trump campaign and asked the person if they had seen anything "interesting in the docs I posted?" Guccifer 2.0 said it would be a "great pleasure" to help.

Prosecutors say weeks later, Guccifer 2.0 referred to a stolen DCCC document posted online and asked the person, "what do u think of the info on the turnout model for the democrats entire presidential campaign." The person responded, "(p)retty standard."

The indictment doesn't identify the person, though longtime Trump confidant Roger Stone acknowledged Friday, through his lawyer, a "24-word exchange with someone on Twitter claiming to be Guccifer 2.0."

"This exchange is now entirely public and provides no evidence of collaboration or collusion with Guccifer 2.0 or anyone else in the alleged hacking of the DNC emails," said lawyer Grant Smith.

In addition, someone at Wikileaks contacted Guccifer 2.0 before the Democratic National Convention asking for Clinton material, court papers show.

The charges come as Mueller continues to investigate potential coordination between Russia and the Trump campaign. Before Friday, 20 people and three companies had been charged in the investigation.

Defendants include four former Trump campaign and White House aides, three of whom have pleaded guilty and agreed to cooperate, and 13 Russians accused in a powerful social media campaign to sway U.S. public opinion in 2016.

Trump's lawyer, Rudy Giuliani, said on Twitter that it was time to end the investigation since "no Americans are involved" in Friday's indictment. But with Mueller still investigating, it's not known whether further indictments are taking shape or will.

"When we confront foreign interference in American elections, it is important for us to avoid thinking politically as Republicans or Democrats and instead to think patriotically as Americans," he said. "Our response must not depend on who was victimized."