PPM: Not intimidated by Ibu; Yameen will win 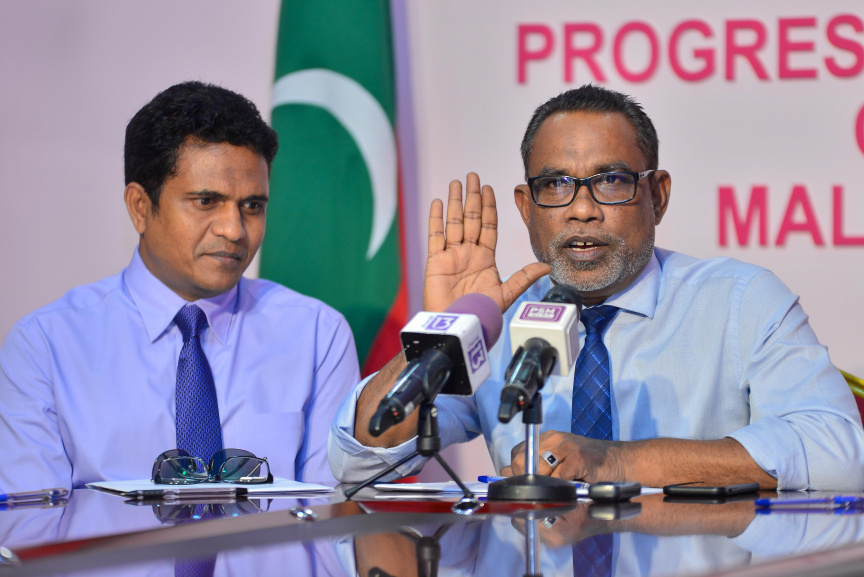 The ruling Progressive Party of Maldives (PPM) says it is not intimidated by opposition’s presidential candidate, Hinnavaru MP Ibrahim Mohamed Solih (Ibu), and that incumbent president Abdulla Yameen Abdul Gayoom is sure to win the majority of votes at the Presidential Elections.

PPM held a press conference this Sunday to provide the latest updates on its presidential campaign.

He said it showed “the lack of confidence in Ibu as in Anni [Nasheed]”.

Adhurey said Nasheed wanted to bring Ibu to power so he can free Nasheed once in office and hold an election mid-term so he himself can come to power.

Adhurey said the people need to remember its MDP which will be coming to power, no matter who their presidential candidate is. He alleged that MDP will never do anything right for the people.

“Whether its Ibu or Abdulla Shahid, or Innakalhey or Udhi Mudhimu or Goanibey Kuda Ali – its MDP. We need to think about this. The people of Maldives have experienced MDP. We saw conflict and violence during MDP’s administration,” said Adhurey.

He said MDP has nothing to gain by changing the name and dressing up in front of the people. And that “the opposition will not be able to produce a candidate who can beat President Yameen.”

“They sit under umbrellas outside the Majlis. They will take coffee from the coffee table regularly. There are two Lavazza machines on both sides. They take their espressos regularly,” said Nihan.

Nihan said Ibu had a huge role in diverting opposition lawmakers away from their legal duties to the people.

While PPM says the party is not intimidated by Ibu, the opposition have expressed confidence Ibu will be able to win the Presidential Elections with equal fervor.

'Ibu being selected as candidate, a step towards peace'