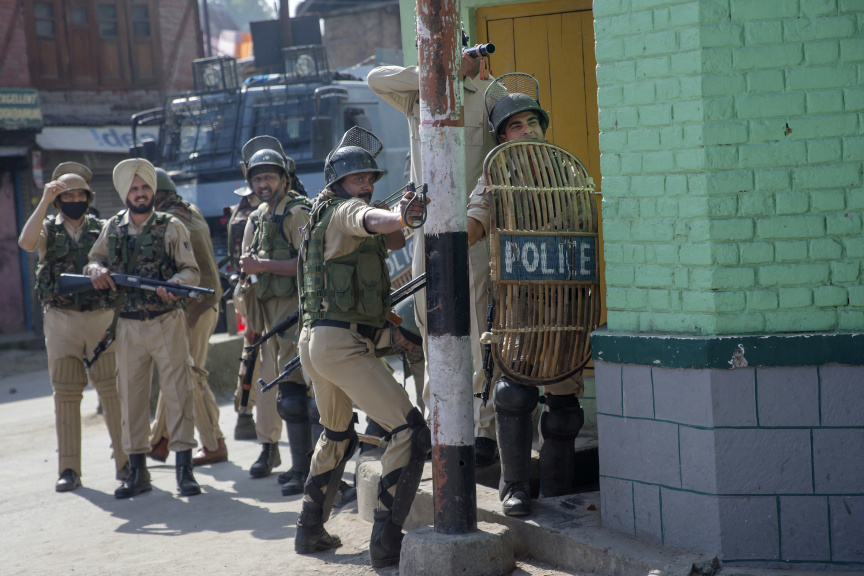 An Indian paramilitary soldier aims his sling at Kashmiri protesters near the site of a gun battle in Srinagar, Indian controlled Kashmir, Saturday, May 5, 2018. (AP Photo/Dar Yasin)

The fighting comes barely a week after the two nuclear-armed rivals agreed to stop trading fire along the volatile frontier and uphold a cease-fire accord dating back 15 years. The two sides on Tuesday agreed to defuse tensions in Kashmir and use existing mechanisms of hotline contacts and border meetings at local commanders' level to resolve the issues.

Indian border guards said Pakistan "yet again blatantly" violated the 2003-cease-fire agreement and they were retaliating. They said the Pakistani shelling was "indiscriminate and unprovoked" and was not just targeting paramilitary outposts but also villages.

Tensions have soared in recent months, as both sides have shelled border posts and villagesr. Each side has accused the other of starting the hostilities in violation of the 2003 accord.

India says 25 civilians and 18 soldiers have been killed this year in over 800 cease-fire violations initiated by Pakistan.

Pakistan accuses Indian forces of more than 1,050 cease-fire violations this year, resulting in the deaths of 28 civilians and injuries to 117 others.

The soldiers from the two nations have engaged in fierce border skirmishes along the rugged and mountainous Line of Control, as well as a lower-altitude 200-kilometer (125-mile) boundary separating Indian-controlled Kashmir and the Pakistani province of Punjab, where most of the latest fighting occurred.

India and Pakistan have a long history of bitter relations over Kashmir, which both claim. They have fought two of their three wars since 1947 over their competing claims to the region.

The fighting has become a predictable cycle of violence as the region convulses with decades-old animosities between India and Pakistan over Kashmir, where rebel groups demand that the territory be united either under Pakistani rule or as an independent country.

India accuses Pakistan of arming and training anti-India rebels and also helping them by providing gunfire as cover for incursions into the Indian side.

Pakistan denies this, saying it offers only moral and diplomatic support to the militants and to Kashmiris who oppose Indian rule.

Rebels have been fighting Indian rule since 1989. Nearly 70,000 people have been killed in the uprising and the ensuing Indian military crackdown.