President: Happiest about peace throughout Maldives 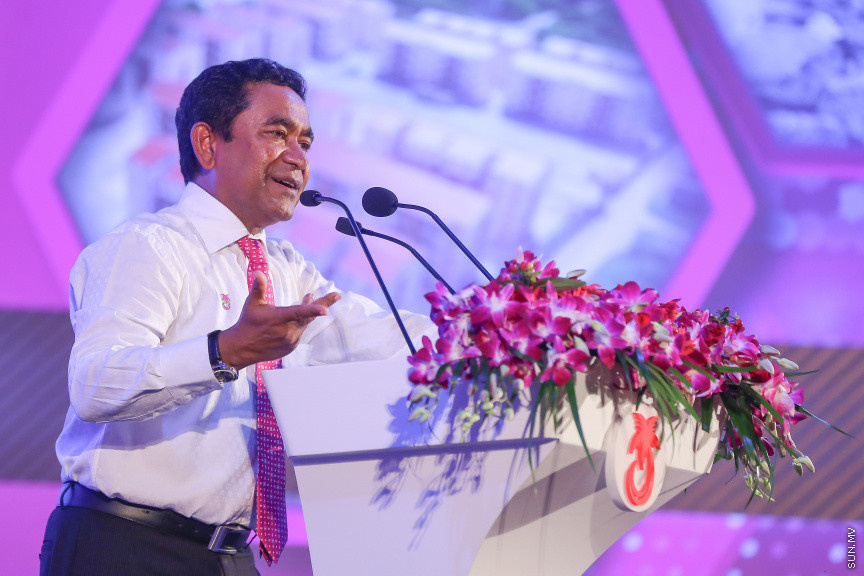 The thing he's happiest about is the spread of peace and security throughout Maldives to a level which hasn’t been enjoyed before, says President Abdulla Yameen Abdul Gayoom.

Speaking at a small function held by ruling Progressive Party of Maldives (PPM) last Monday night to celebrate new members signing with the party, Yameen said people needed to acknowledge the peace and security enjoyed throughout the Maldives.

“What I’m happiest about is the peace to a level which hasn’t been experienced before, even in this situation; we need to acknowledge that there’s peace throughout Maldives,” said Yameen.

Yameen said that 57 people have been murdered in the country since 2012; an alarming number given that Maldives is a small Islamic community.

He said that harassing and bullying neighboring families just because of a disagreement is not in the Maldivian culture. He also said that the country has grown more peaceful during his administration.

Yameen said major development projects, the likes of which Maldivians had not even dreamt of, is being carried out in the country. He said that was also something he was proud of.

He said the benefits from the projects will be enjoyed by Maldivians, especially young men and women who enter the labor market.

“We will see. I am assigning the opening of an airport each day, across Maldives, over the four days left in this week. We are assigning these projects with full financial security,” said Yameen.

He said the four new airports will not provide locals with easy access to transportation, but will ensure young men and women the convenience of gaining employment within their atolls.

He said tourism needs to be expanded throughout the Maldives with the four new airports.

“The reason why tourism needs to be expanded across Maldives is because; if there are passengers coming in through the major airport under construction over the next five to eight years, they will not be filling the beds in tourist resorts near Male’ City, but they will travel to other parts of the country.”