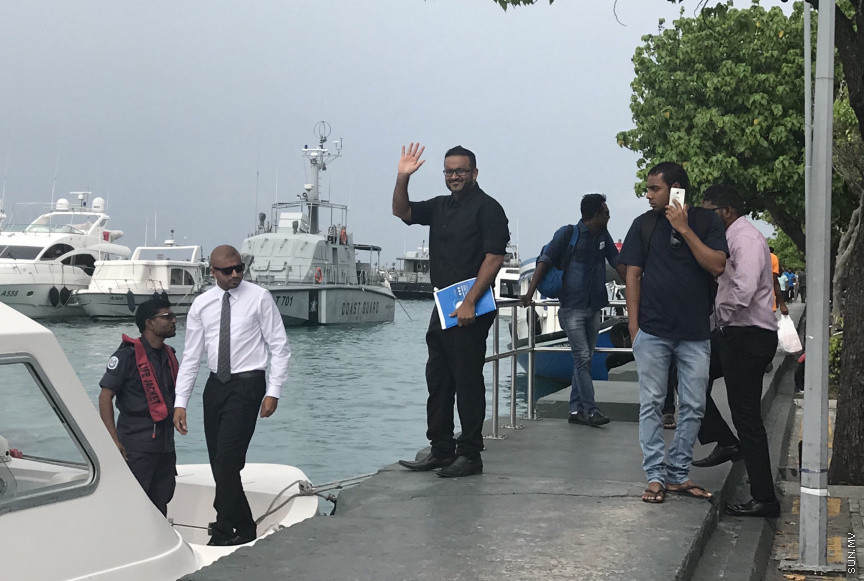 Former Vice President Ahmed Adeeb Abdul Gafoor gestures as he is transported back to Dhoonidhoo Prison after a court hearing. (File Photo/Sun)

The Supreme Court order on February 1 called for the immediate release of nine politicians (including Adeeb and Faris) and immediate reinstatement of 12 lawmakers.

Statements provided by anonymous State witnesses for the investigation into the February 1 court order have been leaked over the social media. They include statement provided by two judges, police officers and one civilian.

An officer at the Marine Police Department of Maldives Police Service described in his statement how he was dispatched to Dhoonidhoo Prison when the whole police force went on alert after the court order on February 1.

The officer, who works as part of the crew on a police speedboat said the speedboat was kept on standby to transport Adeeb and Faris to Male’ City from Dhoonidhoo, to comply with the court order.

He said both could clearly speak to each other.

The officer said that after they got on the speedboat, they were told to wait for further instruction.

The officer said he sat directly in front of Adeeb.

He said both Adeeb and Faris were conversing when he sat down, and that he heard the conversation.

“He told Ahmed Faris Maumoon he offered MVR 80 million. And that it was planned in a very systematic manner and that they wouldn’t have a choice but to let them go,” said the officer in his statement.

The officer testified that he and Adeeb were about a foot apart when he overheard the conversation.

He said that he then later saw Adeeb and Faris being taken back towards the arrest station at Dhoonidhoo.

Maldives Police Service has stated it is investigating the leak of statements by the State witnesses in the case as a very serious matter. The authority has accused the main suspects in the Supreme Court order case of being behind the leak.