One of Tuesday night’s accident victims in ICU 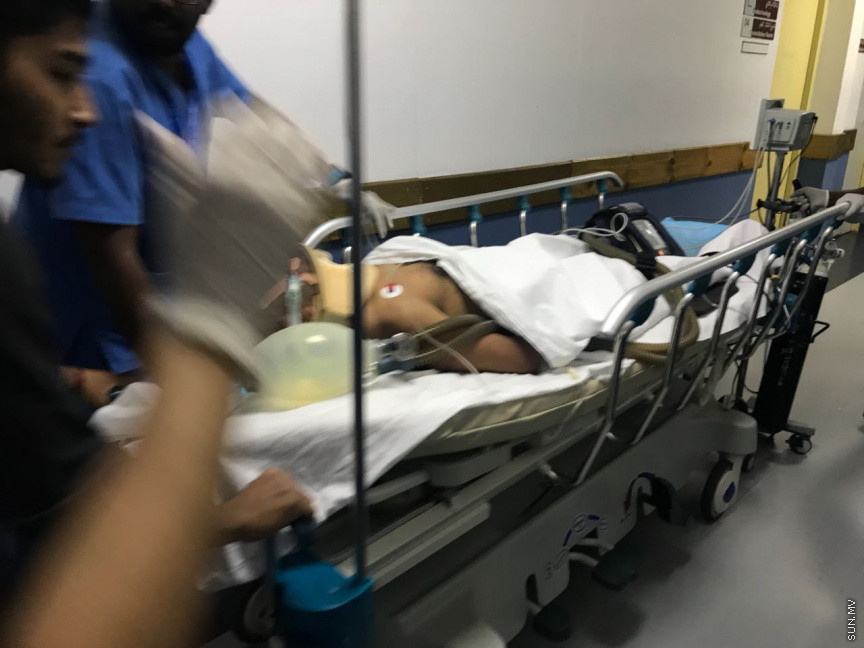 Ismail Naseem, 44, from M. Water Plus in Male’ City lies on a gurney at ADK Hospital after involvement in a motorcycle collision on April 24, 2018. (Photo/Sun)

The man who was rendered unconscious in the motorcycle collision which took place in front of the President’s Office is in critical condition, says ADK Hospital.

The collision took place at approximately 11:34 pm when a motorcycle going at high-speed lost control and collided with another motorcycle.

The man in critical condition due to the collision has been identified as Ismail Naseem, 44, from M. Water Plus in Male’ City.

Eye witnesses reported to “Sun” that the man hit his head and was rendered unconscious in the collision. They reported seeing him bleed from his nose.

Managing Director at ADK Hospital, Ahmed Affaal reported to “Sun” this Wednesday morning that two men were taken to the hospital with injuries from the collision. He said that out of the two, the 44-year-old is in critical condition and is being treated at the Intensive Care Unit of the hospital.

The hospital has not released details of his injuries.

Affaal said the other accident victim, a 20-year-old, was discharged from the hospital after treatment on Tuesday night.