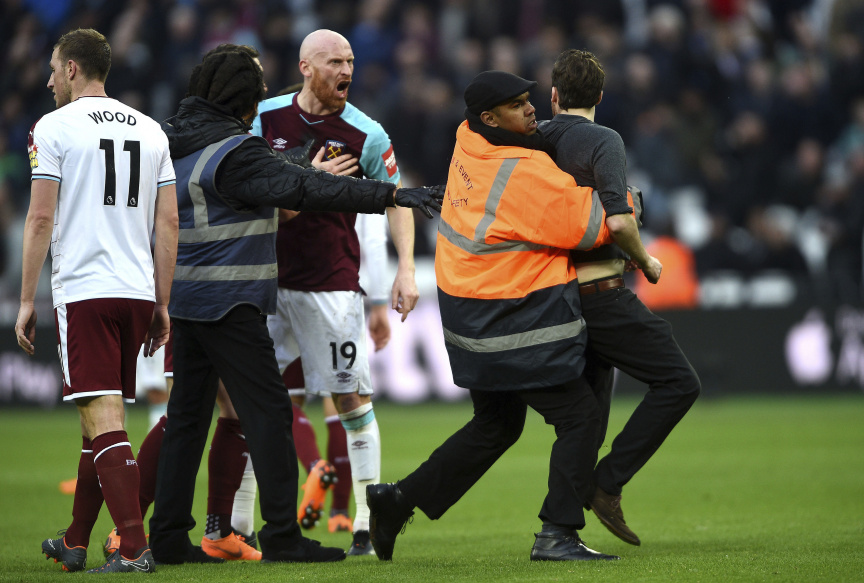 A Pitch invader is seized by security staff during the English Premier League soccer match between Burnley and West Ham at the Olympic London Stadium in London, Saturday, March 10, 2018. (Daniel Hambury/PA via AP)

MANCHESTER, England (AP) — An ugly win for Manchester United. An even uglier loss for West Ham.

United scored twice through Marcus Rashford in the opening 24 minutes then produced a gritty, ultra-defensive display to grind out a 2-1 win over fierce rival Liverpool and strengthen second place in the Premier League.

"It was perfect, in relation to what the game gave us," said United manager Jose Mourinho, who won the tactical battle over rival manager Juergen Klopp.

There was as much action in the stands as on the field at West Ham, where home fans invaded the field on two separate occasions to confront players and gathered below the directors' box to force the club's owners to be escorted out in the second half of the 3-0 loss to Burnley.

Young fans were pictured taking refuge in Burnley's dug-out amid the disorder.

"It's well known fans haven't been happy for a long time," said West Ham captain Mark Noble, who grabbed one of the pitch invaders and threw him to the ground in one exchange.

"I'm a human being. I know I'm out on the pitch, under scrutiny, but if someone approaches me I will protect myself."

West Ham stayed just above the relegation zone with its latest heavy defeat — a week after losing 4-1 at fellow relegation rival Swansea — but its Premier League plight is nothing compared to West Bromwich Albion's.

A 4-1 home loss to Leicester left West Brom in last place on 20 points, seven from safety with eight games left.

Liverpool's players failed to recover from a first half where they were bullied by United and failed to deal with the hosts' direct and aggressive approach.

The source of both goals was long clearances by United goalkeeper David De Gea to Romelu Lukaku, whose power and athleticism was too much for marker Dejan Lovren.

Lukaku's flick-on was seized by Rashford, who drove in the first goal in the 14th minute. Then Lovren fell to the ground in an aerial challenge with Lukaku, whose pass into the area was intercepted only for Rashford to sidefoot home the loose ball.

United packed its defense, with wingers Juan Mata and Rashford playing as auxiliary full backs and central midfielders Nemanja Matic and Scott McTominay patrolling in front of the defense. Liverpool's top scorer Mohamed Salah had a quiet day, and was thrown to the ground by Chris Smalling at one point.

Liverpool dominated possession but could only muster one goal, a spectacular miscued volley by United defender Eric Bailly into his own net in the 66th.

Criticized for walking around at times in last weekend's loss at Man City, Chelsea's players were enjoying a stroll against Crystal Palace — until the final 10 minutes.

Chelsea was 2-0 up after 32 minutes after a strike by in-form winger Willian and an own-goal by Martin Kelly.

Palace fought back late on and, after Alexander Sorloth had a goal disallowed, Patrick van Aanholt scored in the 90th to ensure a nervy finish.

One of the more bizarre scenes during a chaotic second half at the Olympic Stadium was the sight of a man running toward the center circle while holding aloft a corner flag.

More worrying was Noble, clearly enraged, grappling with another pitch invader with no stewards anywhere in range.

It was a return of the crowd disorder that marked the team's first few weeks in the stadium, where it moved in the summer of 2016 on a rented basis after leaving its Upton Park home of 112 years.

West Ham has called an emergency meeting and said it was "committed to taking decisive and appropriate action" after launching a "full and thorough investigation" into the disorder.

The problems started after Ashley Barnes gave Burnley the lead in the 66th minute. Chris Wood added two further goals as West Ham collapsed to be only three points above the relegation zone with eight games left.

West Brom manager Alan Pardew will hold talks with the club's owners after a seventh straight loss in all competitions left the team destined for the second tier.

"They might think a change is a better thing for the club, I don't know," said Pardew.

It is West Brom's worst run of results in 15 years.

Everton and Newcastle eased their relegation concerns with convincing wins.

Wayne Rooney's missed penalty had little effect as Everton was already 2-0 ahead against 10-man Brighton and on its way to a third straight home win to climb to ninth place.

Swansea played with just 10 men from the 11th minute to draw 0-0 at Huddersfield. Both teams are four points above the relegation zone.