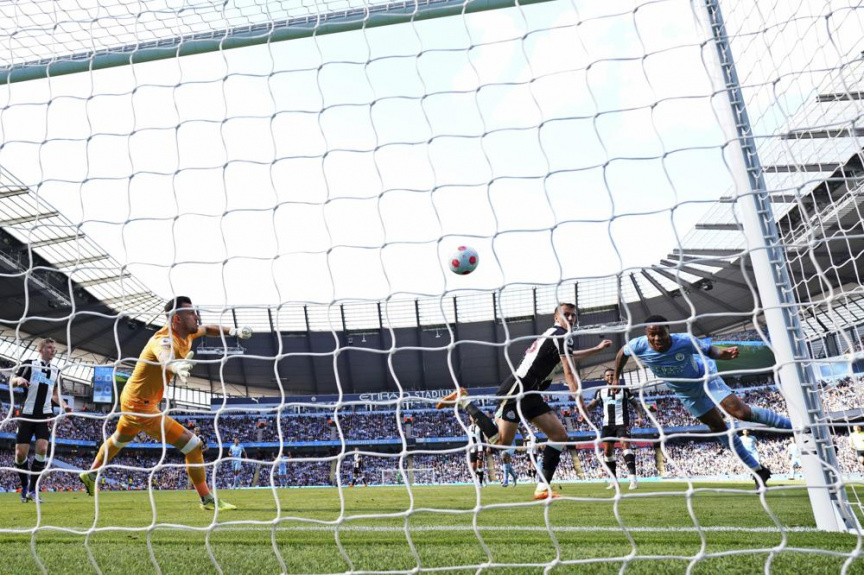 MANCHESTER, England (AP) — Manchester City moved on from the disappointment of its Champions League exit with a 5-0 rout of Newcastle that sent the defending Premier League champions three points clear of Liverpool at the top on Sunday.

Raheem Sterling struck twice while Aymeric Laporte, Rodri and Phil Foden were also on target at the Etihad Stadium as City moved closer to a sixth title in 10 years with three games remaining.

The performance and result were an emphatic response to the late semifinal collapse at Real Madrid on Wednesday that ended City’s bid for a first European Cup. It also took advantage of second-place Liverpool drawing 1-1 against Tottenham on Saturday.

City claimed the lead in the 19th minute after a fine piece of vision from Ilkay Gündoğan, who clipped a fine ball across the box to pick out João Cancelo at the far post. The defender headed back across goal and Sterling dived in to head home.

The second goal came following a corner in the 38th. Newcastle goalkeeper Martin Dubravka failed to hold Gündoğan’s volley from the edge of the area. Although Dubravka reacted quickly to deny Ruben Dias on the rebound, he could not prevent Laporte slotting in.

The third goal also came from a corner in the 61st when Rodri found space at the near post to head home from Kevin De Bruyne’s delivery.

That only served to fire up City more and Foden made it 4-0 in the last minute before Sterling completed the rout in injury time against 13th-place Newcastle.