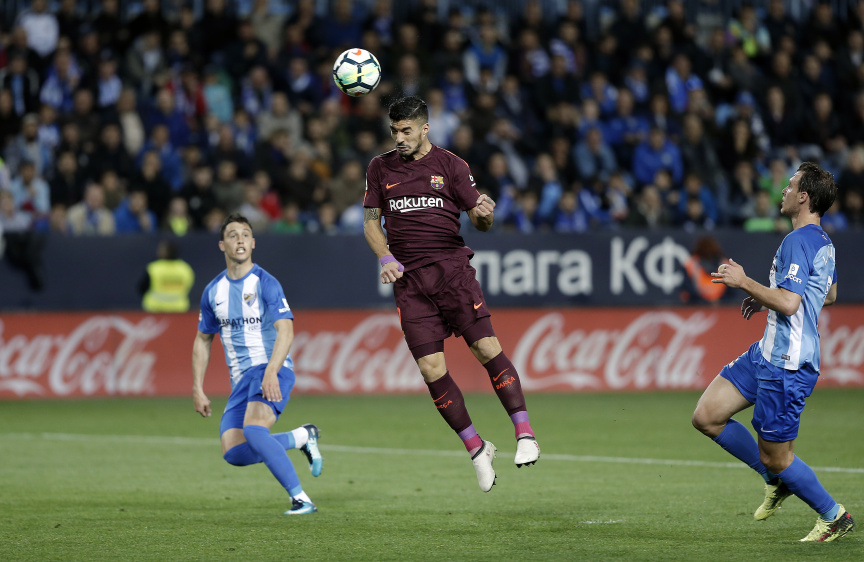 Barcelona's Luis Suarez, jumps for the ball next to Malaga's Ricca, left, and Miquel, right, during a Spanish La Liga soccer match between Malaga and Barcelona in Malaga, Spain, Saturday, March 10, 2018. (AP Photo/M.Pozo)

MALAGA, Spain (AP) — Barcelona had no trouble handing 10-man Malaga another loss despite not counting on Lionel Messi, who missed the match to attend the birth of his third son on Saturday.

Luis Suarez and Philippe Coutinho scored in the 2-0 win for Barcelona before the hosts lost Samuel Garcia to a direct red card for a rash studs-first tackle into the foot of Jordi Alba on the half-hour mark.

Barcelona said before the match Messi would not travel with the team for "personal reasons." The Argentina forward later announced his wife gave birth to a boy named Ciro.

"Leo is the best in the world so we always miss him when he can't play," Coutinho said. "But something very good has occurred in his life and we congratulate him. Now we can look toward the next game."

Messi's next match will be on Wednesday for the Champions League visit by Chelsea. Barcelona will look to make good on the 1-1 draw it earned in the away leg of their round-of-16 tie.

Barcelona remained unbeaten in the Spanish league through all 28 rounds and increased its lead to 11 points over Atletico Madrid, which hosts Celta Vigo on Sunday.

Suarez opened the scoring in the 15th minute moments after Malaga goalkeeper Roberto Jimenez did well to get low and frustrate Barcelona's first of many scoring chances.

But Jimenez could only watch when Alba's long cross met Suarez's run near the penalty spot, where the striker floated a header into the corner of the net.

That gave Suarez 21 goals, second in La Liga to Messi with 24.

Coutinho and Ousmane Dembele, the two players Barcelona paid more than 300 million euros to sign this season, linked up to double the lead in the 28th.

Dembele used a quick cut back in the area to open a passing lane and slipped a ball to Coutinho, who completed the move with a skillful flick of the inside of his right boot to beat Jimenez.

Dembele, whose adaptation to Barcelona had been hampered by injuries, had his best performance since leaving Borussia Dortmund for the Catalan club. He showed the verve and decisiveness that he lacked in prior matches with his runs and passing choices.

"(Dembele) is a player who needs time. He is young, he has had an important injury, and the spotlight is on him," Barcelona coach Ernesto Valverde said. "He played better than in other matches, but he always tries."

Malaga stayed in last place after a seventh consecutive loss.

Chelsea beats Palace in EPL before trip to Barcelona