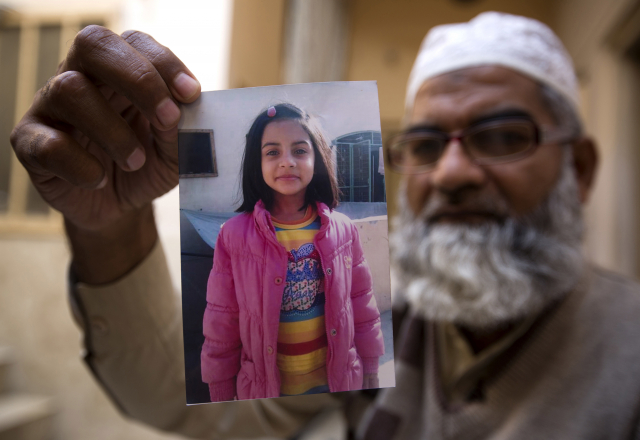 LAHORE, Pakistan (AP) — A Pakistani court on Saturday sentenced a serial killer to death after finding him guilty of killing eight children, including a 7-year-old girl whose rape and murder drew nationwide condemnation and triggered violent protests, a public prosecutor said.

The court announced the decision in the presence of Mohammad Imran, 24, who had pleaded guilty during the five-day trial, the public prosecutor Ehtesham Qadir told reporters outside a high-security prison in the eastern city of Lahore, where the trial was held.

Imran was arrested in January, two weeks after authorities say he raped and killed 7-year-old Zainab Ansari and threw her body into a garbage dump in the city of Kasur. Angered over her murder at the time, residents attacked a police station, sparking clashes in which two persons were killed.

Zainab disappeared in the first week of January while walking to a nearby home for Quranic studies.

Her parents had gone to Saudi Arabia for pilgrimage at the time and she was left with relatives. They quickly returned home, but by that time their daughter's body had been found and preparations for her funeral and burial were underway amid tight security.

Since Zainab's killer left no clue, police and investigators obtained DNA samples from hundreds of suspects, and Imran's sample matched with her, leading to his arrest.

Imran confessed to the crime and said he lured the girl by telling her that her parents had come back and that she should go with him to meet them.

On Saturday, Qadir said Imran had the right to appeal, but he may not challenge the verdict as he confessed to his crimes during the trial. "Imran even today told the court that he killed the eight girls," he told reporters.

He did not say how Imran's execution would be carried out, but many Pakistanis have demanded he be publicly hanged. The horror of Zainab's killing in January was brought home for Pakistanis by a photo of her that went viral on social media, showing the smiling girl in her favorite bright pink coat, with a pink barrette holding back her hair.

TV channels aired the photo alongside pictures of her lifeless body found Jan. 9.

Shortly after Imran's conviction, Zainab's parents expressed their satisfaction, saying they received justice. However, they said Imran should be hanged in a public place so that others learn a lesson from his fate.

Imran "should be stoned to death," her mother, Nusrat Ansari, told reporters.

Zainab's father, Mohammed Amin Ansari was present when the court announced the decision. He thanked the judiciary, government and investigators for giving him speedy justice. He also called for a public execution.

"My daughter has gone, she will not come back, but I want to save daughters of other people," he said.