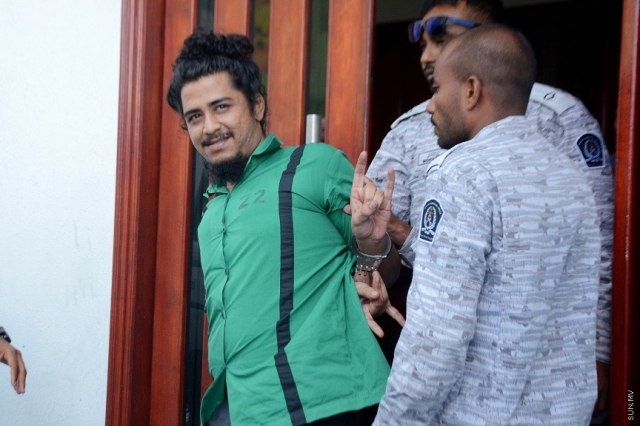 Request made by Shumba’s lawyer, Abdulla Haseen to allow him to be transferred to house arrest was granted by Criminal Court during the hearing held this Wednesday.

It has been over one year since Shumba has been in detention in Maafushi Prison.

Haseen argued that Shumba had no record of suspicion of any violent behavior in the past, and that being kept in an environment with so many convicts could have a negative impact on him.

Judge Abdul Baaree Yoosuf granted the request and ordered that he be transferred to house arrest.

Judge Baaree warned that Shumba would be transferred back to prison if he made any attempt to influence the outcome of the case.

The court also heard testimony of two of the State’s four witnesses during this Wednesday’s hearing.

The two State witnesses testified that they were sure the Twitter account in the name of “Shumba Gong” was his. And that Shumba made a tweet threatening to kill Zahid, which he later deleted.

“I know Shumba. I know him from PPM events and through the Viber group. I am part of the Viber group “PPM Social Media”. I saw Shumba’s threatening messages and pictures to Zahid from the group,” testified one of the witnesses.

Shumba is accused of sending death threats to Zahid through Viber, Twitter, and text messages from multiple phone numbers during the month of October, 2015.

After the two witnesses completed providing their testimony, State prosecutor said the prosecution was unable to summon the other two witnesses to court as one was currently abroad, and the other wasn’t picking up the phone.

The State prosecution requested one week to summon the witnesses.

Judge Baaree ended the hearing granting the State prosecution’s request for a period of one week.