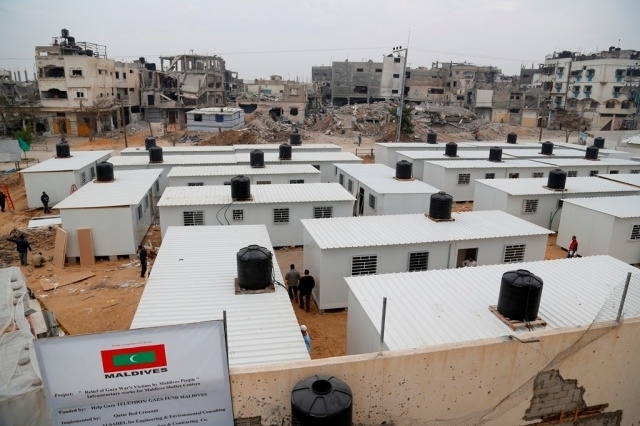 Shelter units have been constructed for displaced families in Gaza using the donations provided by the Maldives.

Qatar Red Crescent (QRC) said in a progress report titled Relief of Gaza War’s Victims by Maldives, dated January 2015, that out of the 100 shelter units to be established under the aid provided by Maldives, 27 have been completed and will be distributed on 15 February 2015.

According to the report, the Maldives Sheltering Centre (MSC) constructed using donations provided by Maldives will accommodate at least 100 displaced families (700 persons), and the MSC will be located in a safe and relatively comfortable area in northern Gaza Strip, very close to original location of demolished homes and existing public facilities such as schools.

The report states that the first shipment of ordered drugs and medical consumables has been received by QRC in Gaza and distributed among hospitals and primary healthcare centres, and coordination efforts are under way with the Israeli military authorities to permit transfer of remaining shipment of drugs and consumables to Gaza, which could be issued mid-February 2015.

The report also highlighted some problems encountered in the implementation plan, and said that the imposed siege remains the main barrier and causes interruptions in the supply chain. Harsh weather conditions in both Gaza and Jordan have also disrupted efforts, says the report, and QRC tried to overcome this by extending work hours on sunny days.