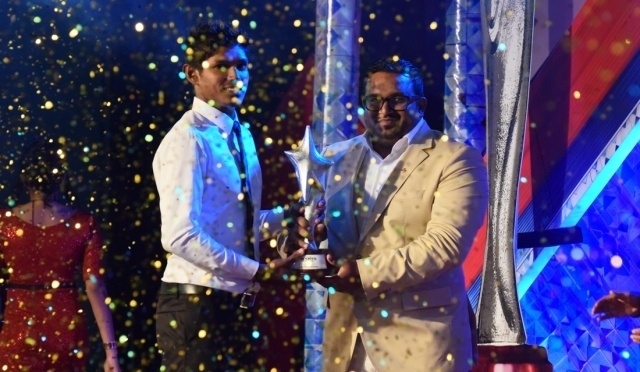 Asadulla Abdulla of Maaziya Sports and Recreation has won the award for Footballer of the Year 2014, at the Haveeru Sports Awards ceremony held yesterday.

With 30 goals to his name, Asadulla also won the Haveeru Sports Golden Boot. The leading goal-scorer was instrumental in winning the FA Cup for Maaziya last season.

The runner-up footballer last year was won by New Radiant’s Ali Faasir and the third place went to Ismail Essa (Messi) from Club Eagles, while the under 21 top player was won by Mohamed Irufan (Irey) of Maaziya Sports and Recreation.

Haveeru Sports title of no.1 Coach went to New Radiant Coach Mika Lönnström from Finland, and the top Referee was Shifan Abdul Raheem.

No.1 female volleyball player was won by Hawwa Raashidha of Police Club. The under 21 title went to Aminath Areesha of Juvenile, Naifaru.

In last night’s event, a special award was presented to the singles women’s table tennis champion Mueena Mueen who has won the title for a 12th consecutive time. The award was also presented to Hassan Saeed, who was in the semi-finals in the men’s 100m and 200m dash in the Asian Games.

Coca-Cola launches Scratch and Win Promotion in partnership with Ooredoo