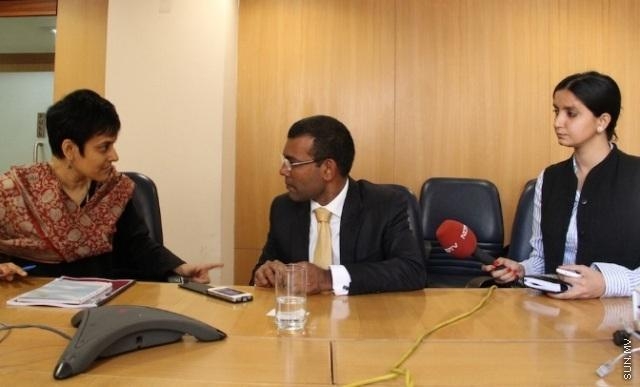 Former President Mohamed Nasheed has said that Maldives might end up in the same situation as countries like Pakistan or Burma, if an early presidential election is not held.

Nasheed is currently visiting India, and told NDTV in an interview that unless an early election is held now, it is not likely that an election will be held in the near future, and the country may end up in the same situation as Pakistan or Burma.

“If elections are not held now, I don’t think it will be possible to hold elections anytime soon. It would be very difficult for anyone to get the elections going. We may be moving into a Pakistan situation, or Burma situation,” former President Nasheed said.

When asked whether India offered assistance on the day the government changed, and whether he refused this offer, he replied that he did not request for Indian military assistance. However he did not refuse Indian assistance.

“I didn’t want military to come in. I didn’t deny help. I told the High Commissioner that it wouldn’t be proper to have the Indian military coming and restraining the Maldives police. I don’t think that would have been acceptable to the Indian government,” Nasheed said.

“Did the Indian government offer that?” the presenter asked.

When asked if he is happy with the current Indian position with regard to Maldives, Nasheed replied that India should publicly state that they want early elections, and the Maldives government must recognize that.

Pakistan is a country struggling with religious divisions, political conflicts and frequent terrorist attacks; while Burma is known for its strong military rule.

CSC does not support proposed revision to Civil Service Act