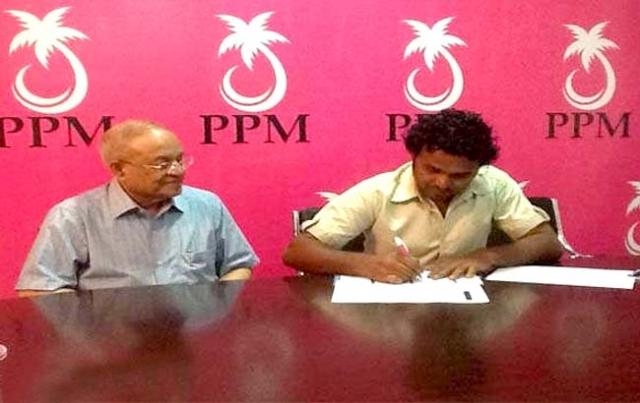 Councillor Anwar Abdul Ghanee, who won Maafaru Council seat on Maldivian Democratic Party (MDP) ticket, has decided to contest for the same seat on Progressive Party of Maldives (PPM) ticket after being removed from MDP.

The ceremony for Anwar to join PPM was held yesterday and attended by former President Maumoon Abdul Gayoom. Gayoom congratulated him for joining the party.

Anwar, who is a member of a family of renowned football players Assad Abdul Ghanee and Akram Abdul Ghanee, told Sun in an interview that he will in the Maafaru seat.

He said that he was not influenced by MDP activists when he worked as Council President as a member of MDP; however, he was removed from the party for refusing to oblige with their demands. He assured that if he wins the seat, he will prioritise the interest of the nation over party interest. He also expressed confidence that PPM will not try to influence his decisions.

“MDP removed me from the party for not complying with their activists’ requests. Today I am contesting for the same seat, but with the confidence that no activist will try to influence me. I am convinced that I will win this seat,” said Anwar.

MDP has also, through a primary held yesterday, chosen a candidate to contest in this election. MDP ticket is held by Mohamed Abdul Ghanee of Heenaamaage, Maafaru.

The Maafaru by-election will be held on 28 April. Candidates can submit names until the end of tomorrow.