There is no political party willing to join Yameen: Ilham 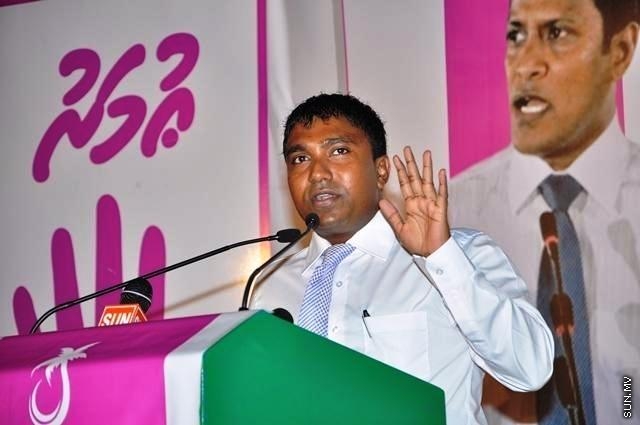 Progressive Party of Maldives (PPM) Deputy Leader and Gemanafushi MP Ilham Ahmed has said that he has held conversations with all political parties and that he has joined Umar Naseer because they have all agreed to unite with Umar Naseer for the next presidential elections.

Ilhams said that he did not join Yameen on the other hand, because the parties have openly stated that they are not willing to join Yameen.

Speaking at Umar’s campaign rally held at Artificial Beach last night, Ilham said that even though the Parliament members are behind Yameen, Umar Naseer is the person who has the people’s affection and that Umar is an unwavering leader who has proven to move in the same direction. He said that people have not seen Umar to drift off course, and that this has gained support for him across all political parties.

“Ilham Ahmed joined Umar Naseer after talking to all political parties, because they support him. Because they have openly said that they will not go with our other candidate Abdulla Yameen. That’s why I am on this boat. This is the reality,” Ilham said.

Ilham and Umar both stressed on the importance of forming a coalition last night. Umar said that his opponents have claimed that his emphasis on a coalition is a sign that he is going to give his presidential ticket away once he wins the primary.

Umar said that the party’s regulations state that the ticket cannot be transferred or sold to anyone and that SMS’s have been circulating, trying to create confusion within the members that support him saying that he is going to give away his presidential ticket. Umar called upon his opponents to refrain from such tactics.

“The assurance that we’re trying to give is that I am doing this for the rights of our members because we cannot attain power without forming a coalition. I am not trying to get the ticket for someone else. You have to believe, I am most against presenting things on a plate. So if I get this ticket, I will not put it on a plate and present it to someone else. But I am ready to make whatever political changes necessary to make a coalition. I will accomplish it, God willing. PPM will come to power in 2013 through a wide coalition,” Umar said.

Supporting Ilham’s points, Umar said that he is positive that no other party will form a coalition his opponent Yameen, and said that he has got the green light from almost all political parties in the Maldives that they will join in a coalition with Umar.

Umar said that his purpose for competing in the PPM presidential primary is not give the ticket away, but to come to the Maldives presidency and put former President Nasheed in jail, and make sure he stays in jail.

Umar has however said on a previous occasion that he is willing to give the away the PPM presidential ticket if he wins the race.