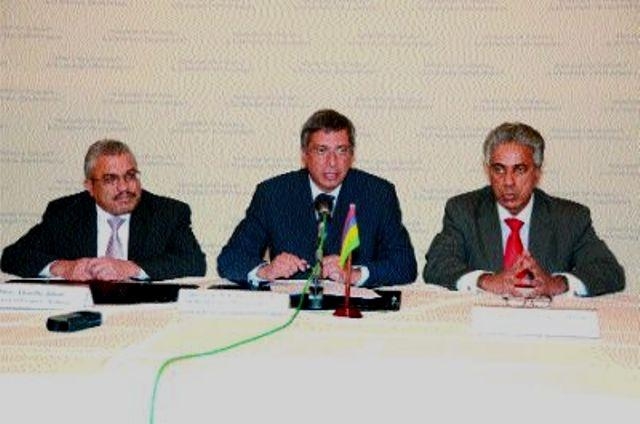 Finance Minister Jihad, who is currently in Mauritius for the inauguration ceremony of the establishment of the Maldives-Mauritius Joint Ecomonic Commission, made his statements after the signing ceremony saying that: “We will be seeking the help of the MRA to develop our revenue authority, since ours is quite new.”

Jihad has expressed his admiration over the functioning of the Mauritius Revenue Authority (MRA) and the MRA Customs Department during guided visits of the institution on Thursday, and said that he is keen to have Maldivians learn from their expertise in the hope of setting up a similar institution in the country.

Jihad added that he has learnt a lot about the Mauritius offshore sector during his visit and that they are currently considering sending a Maldivian team in Mauritius to train and learn about Mauritius’s accomplishments.

The signing ceremony for the establishment of the Maldives-Mauritius Joint Economic Commission was attended by Maldives Finance Minister Jihad and his Mauritius counterpart, Vice Prime Minister and Minister of Finance, Xavier Luc Duval, along with Mauritius Minister of Foreign Affairs, Arvin Boolell.

Both governments have agreed that the Joint Economic Commission will enable the two island states to develop new avenues for cooperation and have more concerted actions and effective strategies given that they benefit from similar opportunities and face the same threats as island states.

Minister Jihad also said that he looked forward to more exchange in talent between the two island states once Maldivian airline Mega Maldives is scheduled to start flying to Mauritius in July 2013.

Mauritius Vice Prime Minister and Minister of Finance, Xavier Luc Duval, during his speech at the ceremony said: “We have invited the Maldives to be part of the Vanilla Islands concept and partner with us as a joint destination to tap the Chinese and South African tourist markets. Furthermore, Mauritius has pledged to provide scholarships to Maldivian students for tertiary studies and Mauritians will also be able to work in the Maldives since there is a shortage of educational and medical staff there.”

Responsibility of the State to prove Hameed was dismissed lawfully: Civil Court