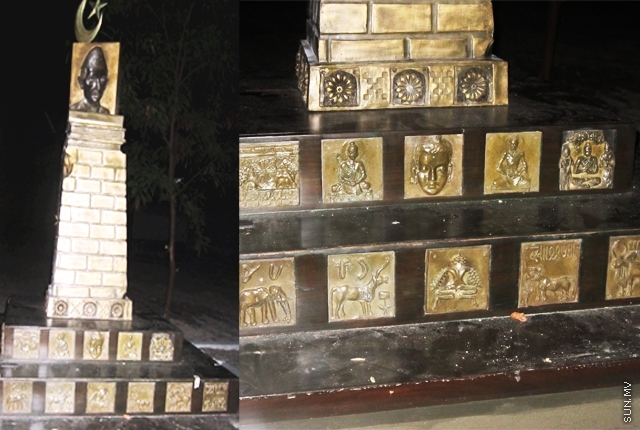 Hithadhoo Magistrate Court has ruled today that several monuments set up in Addu City for SAARC Summit are in conflict with the law, and ordered the removal of these objects and prohibited placing them at any other location.

An order was issued to City Council to confiscate these monuments which represent the religious beliefs of the countries mentioned above, and therefore may facilitate the introduction of the practice of other religions in the Maldives.

“The Addu City Council is ordered to confiscate the aforementioned monuments within the limits of the law.”

The ruling also indicates that even though the monuments are gifts given by foreign countries, no person has the authority to bring these items into the country, and that they were brought in against the law governing permitted goods in the Maldives.

According to the ruling, the Prosecutor General is ordered to take the necessary legal steps against those involved in bringing the monuments into the country.

A resolution was passed last week by the City Council Office under which the remaining monuments were removed. The Pakistan monument, Afghanistan monument and Nepal monument were stolen prior to their removal.

Crime against Judge Abdulla can be prosecuted by international criminal court: Nasheed