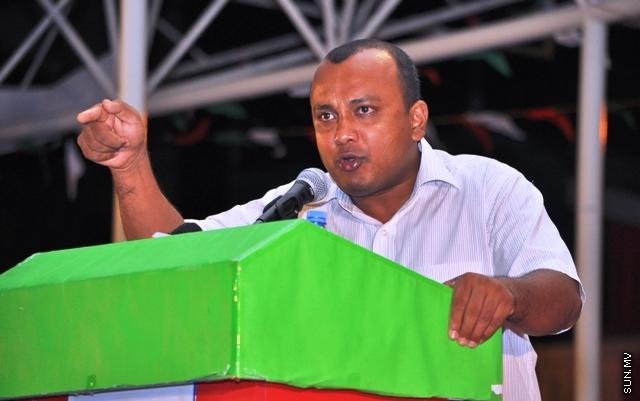 The National Movement has said that Abdullah Shahid challenged the Supreme Court when he sent the notice to Defence Minister Mohamed Nazim, after the Court had issued an order to halt conducting secret voting at the Parliament on no-confidence motions.

While speaking at a rally at Artificial Beach under the theme ‘People’s Parliament to the people’, member of National Movement Steering Committee and Minister of State for Finance Abbas Adil Riza said that the Speaker of Parliament had challenged the court order and acted in a cowardly manner.

He said that unless Shahid immediately ceases his efforts to violate the constitution while holding the post of Speaker of Parliament, the National Movement will ensure that this comes to a stop.

“I am informing Abdullah Shahid, if the Parliament tries to violate the constitution, we will break up the Parliament. It was a cowardly thing Shahid did, to challenge the Supreme Court. These things happen because he does such things in his life. If you think you’ll get to rule this country even for three months, you’re misled. That’s a dream. That dream will never come true. I am telling you Shahid, stop your efforts to violate the constitution immediately. Otherwise will make sure it comes to an end,” he said.

Last night, the National Movement officially announced their series of events under the theme ‘People’s Parliament to the people’.

People should not destroy the nation as a consequence of being handed out legally prescribed punishments: President