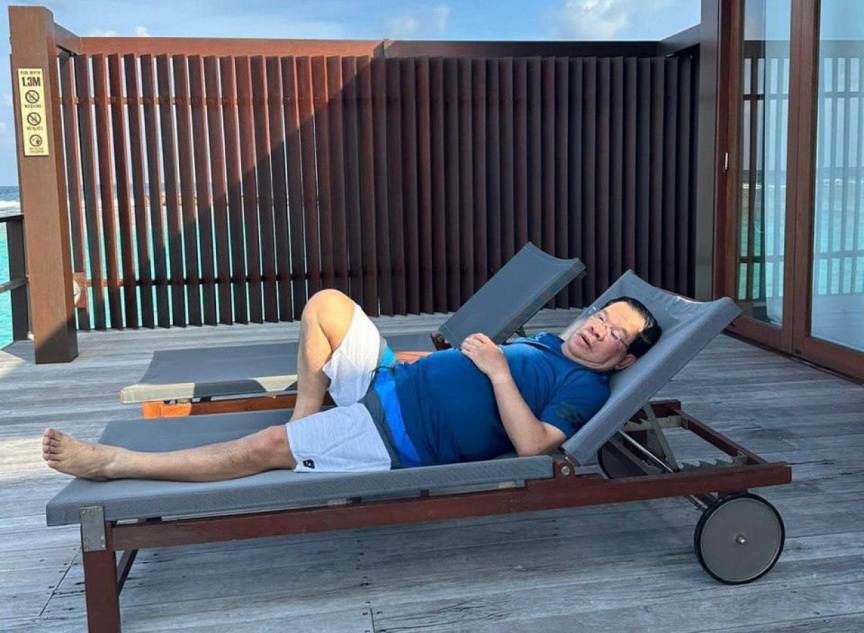 The Cambodian Prime Minister Hun Sen, who is here on an official visit at President Ibrahim Mohamed Solih’s invitation is enjoying his time in the Maldives.

Hun Sen shared pictures he took at the resort he was staying at on Facebook yesterday.

The pictures he posted on his official Facebook page, with a follower count of 13 million people, include one of him relaxing on a sun bed and of him enjoying the private infinity pool of the villa and the clear blue ocean of the Maldives.

In addition to these, he also posted pictures of him unwinding on the deck of the villa wearing a robe. The photos show him looking very content and happy about the natural beauty of the popular holiday destination.

The happiness that comes from witnessing the crystal clear azure waters of the Maldives, as the poets have described, can be seen from the caption of Hun Sen’s Facebook post.

The post that the Cambodian Prime Minister posted on Facebook has gained a lot of attention. With over 158,000 people reacting and over 6,200 people sharing the post. Among the over 16,000 comments on the post, a lot of comments are in Khmer, the official language of Cambodia.

Among the comments, many were about the happiness they feel about seeing the Prime Minister focus on himself and relax.

The comments of the post show that, even among Cambodians, there is talk of the Maldives, and that the commenters are amazed and happy about the resort that Hun Sen is staying in.

The Cambodian Prime Minister will be staying in the Maldives till January 17. Many agreements and discussions are to be held during this trip to improve the diplomatic relations between the Maldives and Cambodia.

This trip is the Prime Minister's first such trip to the Maldives. Cambodia and the Maldives established diplomatic ties on September 21, 1995.

'Imports from Cambodia will reduce price of staples'